What's the Meaning Behind the Shield on the GoldSilver Products?

One thing I love about GoldSilver is that we’re big enough to create our own line of products. We have beautiful silver rounds with our own designs, priced near spot, with the potential for greater appreciation for those with limited mintage.

Our own 10-ounce silver bar comes with .999% purity, with our proprietary shield stamped prominently on the front.

But do you know all the details about the shield that appears on most of our exclusive products? Investors have asked about it, so Alex asked me to explain it.

It’s an extravagant, vibrant symbol. And it contains a powerful message. One Mike Maloney lives by and that highlights his belief system.

As I learned more about the shield, it spurred me to buy even more of our exclusive products—I’d rather buy something with meaning on it, than a bland product with no message. 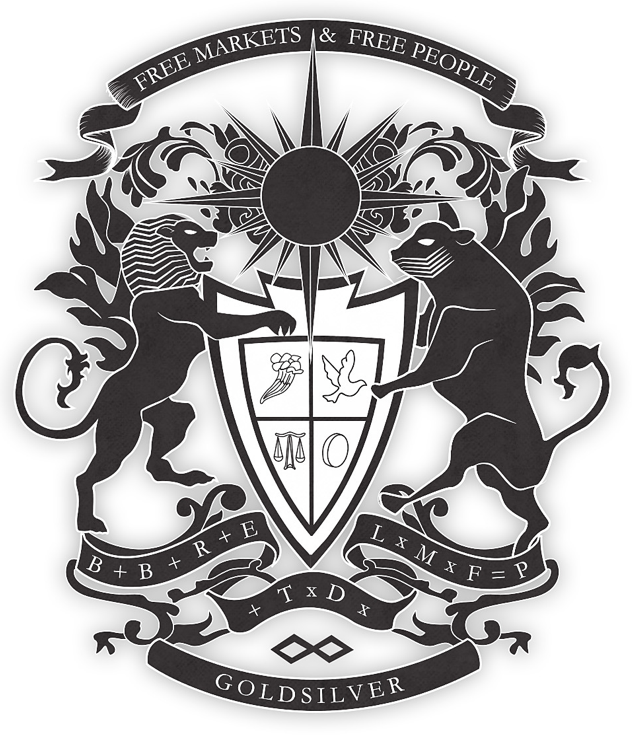 Starting at the top, you’ll see the saying, “Free Markets & Free People.” This is the goal Mike has strived for with GoldSilver.com. If markets are free, people can be free.

You’ll then see a sunburst, which is symbolic to our mission statement. It means “To Enlighten the World.”

Next you see the Lion and the Bull holding a shield. The Lydian Lion and Bull were depicted on the very first forms of money. Gold and silver became currency in ancient Greece sometime between 680 and 630 BC. Prior to then, vendors and traders had to stop and weigh their “money” in order to buy and sell. They had to account for the differences in quality and weight—but once gold and silver were formed into equal measures, they became “fungible,” or interchangeable, and traders no longer had to stop and weigh their metal to make a transaction. This major transition into a widespread form of currency is one big reason Greece flourished. If you haven’t seen it, Mike talks about this at the beginning of episode 2 of the Hidden Secrets of Money—very worth watching.

Next, the Lion and Bull are holding an arrowhead, which was one of the first commodity currencies. It’s on our shield because gold and silver were one of the preeminent forms of currency when it became standardized.

What about the symbols inside the shield? They help form our mission statement. Starting in the upper left, here are the symbols and what they represent:

Put it altogether and you have the GoldSilver mission statement:

To Enlighten the World, That Maximum Prosperity Can Only Be Achieved through Individual Freedom, Free Markets, and Sound Money

What about the ribbon along the bottom? This refers to Mike’s most important work to date, the culmination of his life’s work on economics and markets. He asked me to wait to detail it, because he’s writing a book on it and will explain it in full.

At the very bottom you’ll see what looks like a sideways “8”, which represents a Wealth Cycle. History shows that cycles repeat, and that wealth doesn’t disappear but shifts from one asset class to another. It’s why we believe as a company that wealth will soon transfer from those who don’t own gold and silver to those that do.

Watch our Pegasus being made, which highlights our shield and its meaning.

And there you have the meaning behind the GoldSilver shield!

The exclusive silver products you buy from GoldSilver are not just real money, but contain a meaningful message that spans throughout history.