What happens when there are almost no organic stock market buyers left? When the valuations are so inflated and fear is so great that the freefall can’t find a bottom? Well, that’s when the federal government steps in and buys. Fake economic growth, meet fake stock market demand. Enter the Plunge Protection Team.

As futures were crashing in after-market trading, the question of who will step in to turn the market around should be pretty obvious. I'm betting on a buyer with unlimited access to new funds and a buyer unconcerned with profit motive. That the PPT or Plunge Protection Team would be deployed soon seems pretty likely. 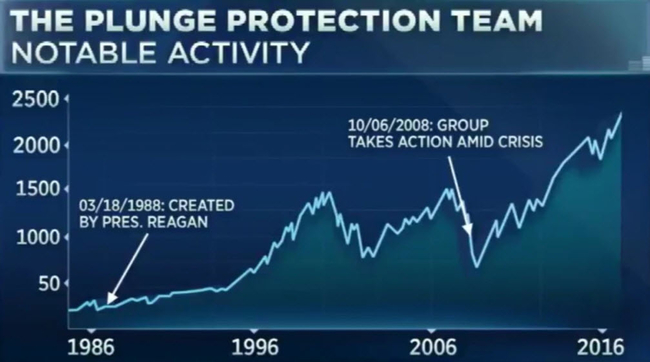 If you’re unfamiliar, per Investopedia:

It was initially perceived by some to have been created solely to shore up the markets or even manipulate them. The team was created in response to the 1987 market crash.

The theory is that the team manipulates markets by executing trades on several exchanges when the market isn't behaving as it would like. It is said to only work with big banks such as Goldman Sachs and Morgan Stanley, only to report to the President, and to keep no records of trades.

ORIGINAL SOURCE: Is the Plunge Protection Team Ready to Step In? If So, It's Unlikely They Will Be Able to Step Back Out! by Chris Hamilton at Economica on 2/5/18