Will It REALLY Happen for Silver? 3 Things I Told the Silver Symposium Audience

After all, many analysts projected silver would be at much higher prices by now, Mike Maloney bet his life on triple-digit silver, and yours truly predicted the next silver spike would occur when inflation spiked (meanwhile it’s doing the exact opposite).

So every investor who owns silver, every mining company looking for or producing the metal, every person wondering if they should continue buying bullion is asking wondering:

Is it really going to happen for silver?

It’s a fair question, especially in light of the price falling below $18 and to 2-year lows. Almost any reasonable person would expect it to rise in this environment.

Are we wrong about silver? Should we give up on it?

If you study silver’s price behavior over the past 50+ years, a clear pattern emerges.

This pattern is so common that it took me 11 slides to show them individually—and that wasn’t even all of them. (We’ll post the video when it’s available.)

And in many cases throughout history, the price remained stubbornly weak in the face of what many assumed were major catalysts. I’m sure investors were asking…

And yet in every instance in history, the price was coiling and sooner or later led to another spike. In some cases, a life-changing one.

Something else was evident: the time between these spikes is measured in years. 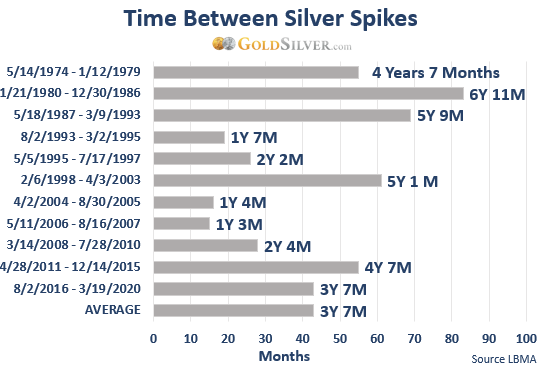 The last silver spike ended almost exactly 2 years ago. Based strictly on historical averages, 2023 could be a very interesting year for silver.

This research shows that while we don’t like silver’s price action, while it isn’t acting like we all thought it would, while it is indeed puzzling and maddening, the current price action does not fall outside of the historical norm. This is actually encouraging, because it means it really isn’t “different this time.”

It also tells us we should expect another spike in price.

Most silver investors know that industrial demand for silver is growing. But research shows that what’s coming for solar demand could catch both the industry and investors off guard.

First, while solar use around the world has grown, check out the goal of the Paris Climate Accord.

While goals from these types of organizations can be lofty, what we do know is where the 194 countries and EU will push their funds… where they’ll devote time and energy and resources… where they’ll incentivize behavior.

In fact, this goal is already being aggressively pursued outside of North America. Research shows, for example, that China is already using double-sided solar panels. This means they can adjust the panels to capture both morning and afternoon sun. Since the US wants to “green the grid” too, it wouldn’t be surprising to see this in America and other countries soon—all of which means more and more silver will be needed.

It isn’t just growth in the number of solar panels; the amount of silver per panel will also rise. For example, some manufacturers are now producing multiple-layered panels to capture the maximum amount of energy from the sun. This too is in the early stages and implies more ounces of silver will be required to meet this growth.

There is a lot of research in this area, too much to cover here, but suffice it to say that it all points to a substantial increase in the amount of silver that will be needed for the burgeoning solar industry.

#3: Silver Historically Had a Delayed Reaction to Inflation

Since I thought the silver price would react to spiking inflation, I wanted to see why it wasn’t.

So, I went back to the last time we had high inflation and charted the CPI vs. the silver price.

Here’s what it shows—notice what occurred in the second half of the 1970s.

In other words, silver had a delayed reaction the last time we had spiking inflation. Like we’re seeing now.

While that observation may not offer a lot of comfort, it does show that there is historical precedence for silver’s delayed response to inflation today.

In the meantime, watch the US dollar, as this has been a big headwind for both silver and gold. The eventual reversal in its “strength” will remove a big barrier for metals prices, and could unleash a sudden spike.

History and Fundamentals: Prepare for the Next Silver Spike

There was a lot more discussed by me and many other analysts at the Silver Symposium.

The overarching message from all of us was that while we don’t like silver’s price action, both history and fundamentals point to a coming surge in demand, and a subsequent surge in price.

Here’s one more slide I shared… it’s what analysts both in and outside of the industry think silver will do in the near future, including a new quote from Mike.

While some of these are from silver bugs, you’ll notice many are not. And they’re all based on core, fundamental factors that point to a coming surge in demand.

And we haven’t even talked about a shift in sentiment or a sudden spike in investor demand, other key catalysts that could, sooner or later, ignite the price.

We’ll post the video from the Silver Symposium once the organizers make it available (probably not for several weeks), which most attendees said they found both fun and useful.

In the meantime, everything I look at says yes, we should all prepare for the next BOOM in silver.