Our newest entry in our Modern Ancients silver collection was inspired by the hero, Ajax. And the Ancient Greek coins that once featured him.

Our Ajax is 1 oz of .999 fine silver, crafted with a striking image of the hero poised in battle. It's truly an epic silver round featuring an epic hero. When you hold one of them, you'll appreciate its high quality - and the fact that it comes at bullion pricing.

Ajax coins were first minted over two thousand years ago in Opus, a burgeoning city on the shores of the Aegean Sea. This is where, according to legend, Ajax departed with 40 ships to fight the epic Trojan War.

The Trojan War is important to the Greeks because it defined who they were as a people. It marked their passage from a loose band of tribes into a powerful civilization that forever changed the world.

And Ajax was a big part of why they won the war.

He was as daring and brash a warrior as he was brilliant. Much like General Patton but instead of carrying Colt 45s, he was on the frontlines -- armed with a bronze sword and wooden shield. 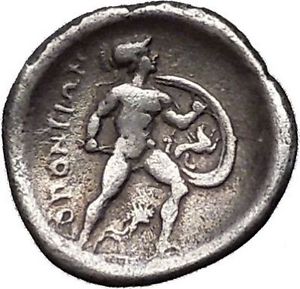 Ancient Ajax coin from approx. 350 B.C. - for reference only.


Ajax eventually perished at sea, but his hero status still grew. After his death, whenever soldiers from his hometown were called into battle, they always left one place open for him in formation, believing his spirit was fighting alongside them.

And when they returned home, they further honored Ajax by striking coins with his likeness on them. The silver used to mint these coins was their salary, the spoils of war.

They fought. Won. And were paid in real money that could not be devalued, altered, or confiscated. No wonder Ancient Greece was one of the most prosperous societies in history.

Our artists took great care to do the original justice. Ajax is lunging forward sword in hand, shield in the other, advancing over the broken spears of his enemies.

It’s an absolutely stunning coin and would make a fine addition to your collection.