It’s hasn’t been fun watching the silver price be so weak and stagnant.

But underneath all the turmoil there’s an important message coming from the investment markets right now.

That message will become clear as you glance through the charts below. And just as important, the message comes with a time limit. That’s not me saying that, but history.

With the breathtaking decline in global stock markets, a mainstream investor might think they represent a better value than silver.

That’s not even remotely the case.

Here’s the five-year performance of the primary US stock exchanges vs. silver.

[All chart data through Tuesday March 10] 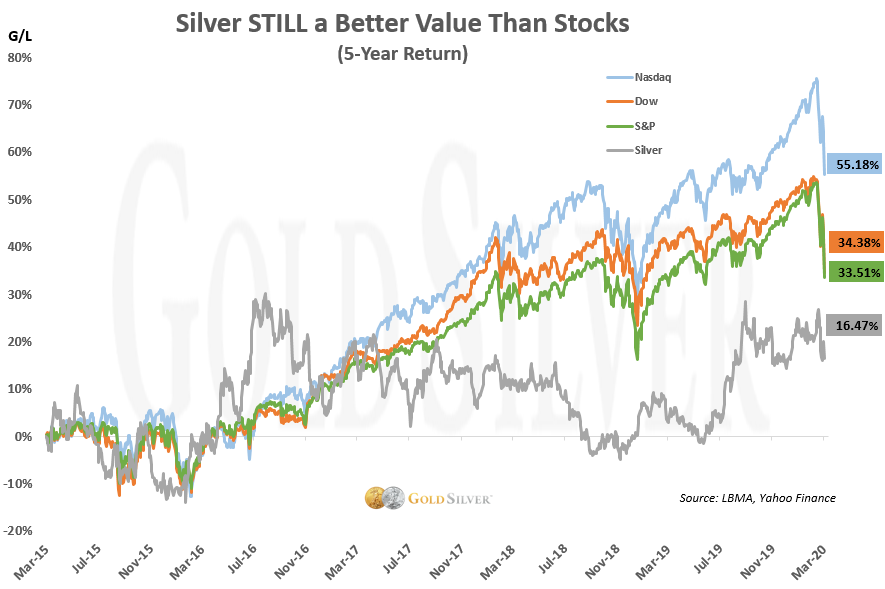 Despite the huge selloff in the major stock indexes, they still carry a superior performance to silver over the past five years. They’ve outperformed it by two to three times.

And this isn’t even a fair comparison. The bull market in stocks began 10 years ago—if we went back that far, the gap in performance between them and silver would be greater. Silver thus remains a better bargain than stocks.

The spread is even worse when you compare silver to the darling stocks—FAANG, Tesla and Microsoft. 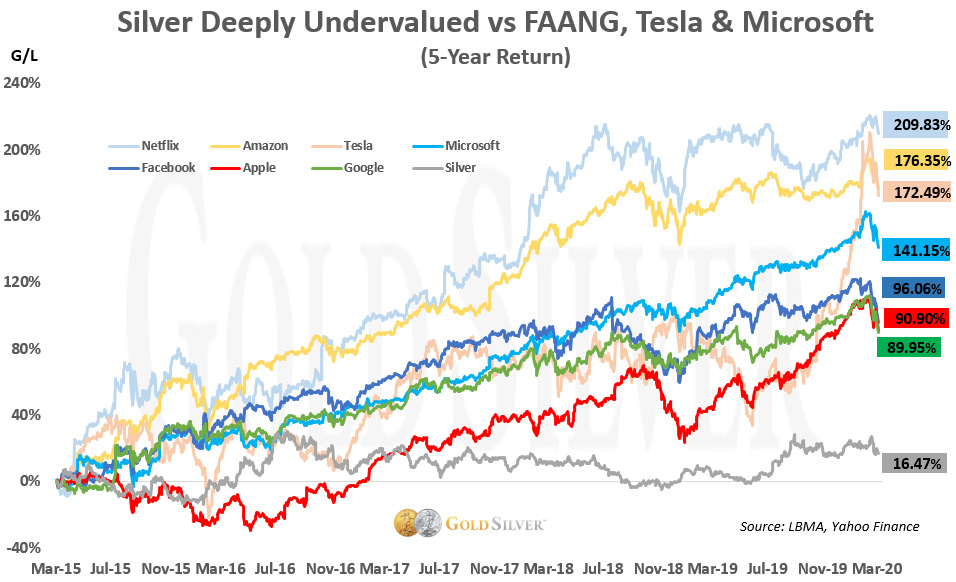 Despite the huge decline in the mainstream’s favorite stocks, silver lags them by multiples ranging from five to 12 times. Again, the gap would be even greater if we went back a full decade. The better value is clearly with silver.

Heck, silver is even one of the biggest laggards in the precious metals space…. 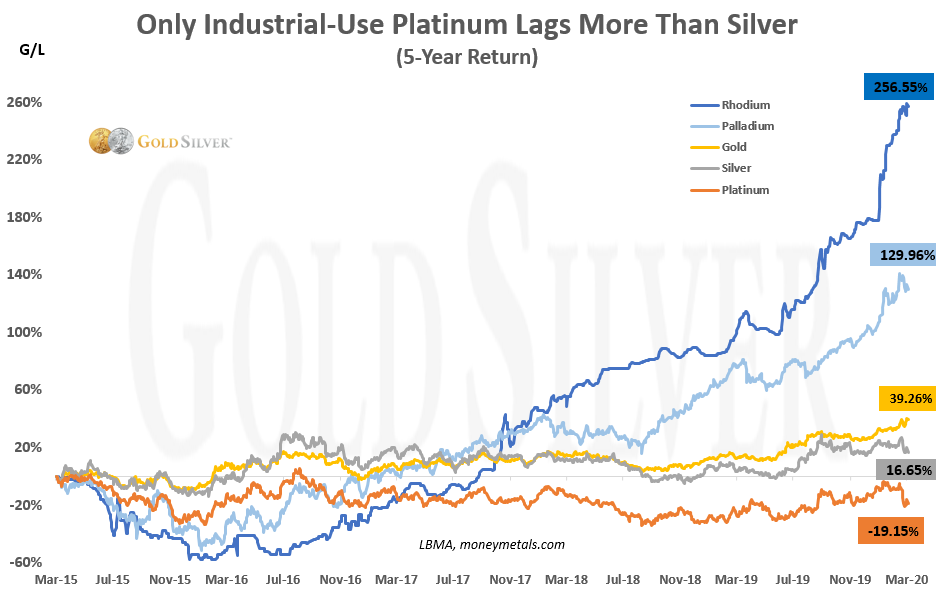 Viewed in a five-year time frame, silver has simply not participated in a run like most of the other precious metals.

Palladium and rhodium have spiked largely due to supply concerns. But when demand falls because of an economic slowdown, it’s likely their prices will cool, too.

What all this shows is that silver has not had a run-up in price like most other asset classes.

Which means it is one of the only assets left that still offers a bargain to investors.

Given this underperformance, and because silver is ultimately a monetary metal that historically responds to monetary concerns, what might be ahead for this cheap metal?

A Preview of Things to Come?

With silver still so undervalued, and given what Mike Maloney is convinced is ahead, the coming surge in silver could be dramatic. 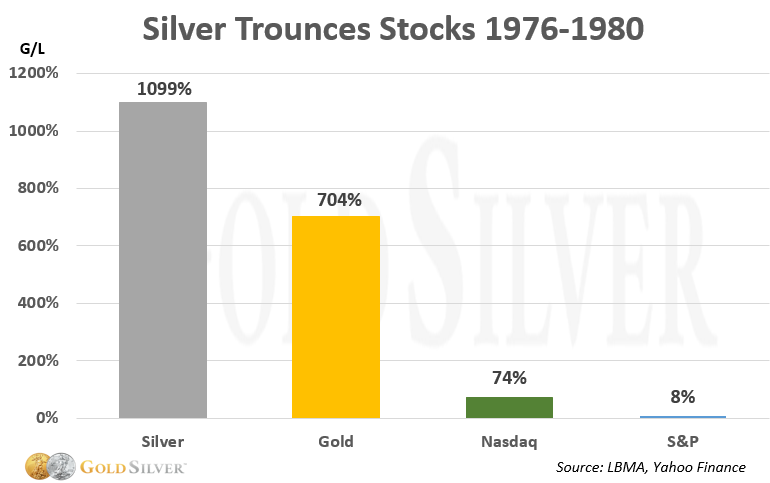 There Is a Time Limit on Cheap Silver

I don’t say this just because no trend lasts forever. That’s true, but there are some very specific reasons I think there is a limited time on how long we’ll be able to buy sub-$20 silver…

I’ve shown before that the biggest determining factor for silver prices is investment demand.

You and I don’t buy paper bullion products (for good reason), but that’s where many mainstream and institutional investors first turn.

And they’ve been gobbling up silver ETFs. 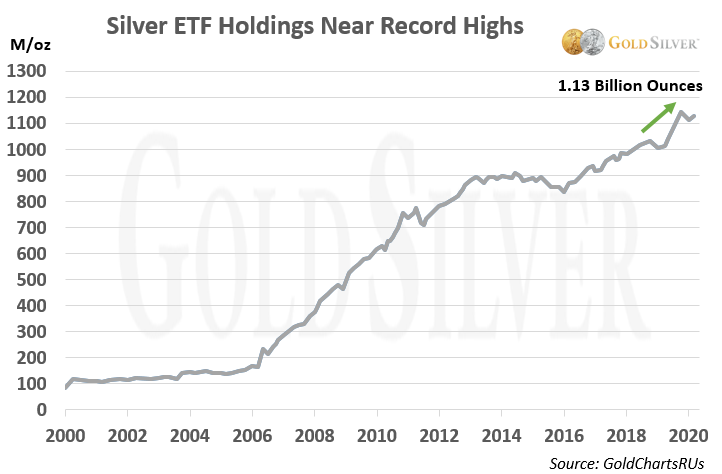 Despite the largely range-bound silver price, investors have been piling into silver ETFs for four years. And you can see how the buying kicked into high gear last year.

Demand for physical silver has been weak for over three years. Sales for sovereign silver coins have been soft globally.

But that might be changing. The US Mint reported that just through March 11, sales of silver Eagles were a whopping 2.32 million ounces.

In other words, silver Eagle sales at the US Mint are already 257% higher than all of last month, and 173% higher than the same month last year. And we have over half the month to go.

I can also tell you first-hand that volumes have spiked significantly across the industry. Including GoldSilver.com. If you’re buying, you’re definitely not alone.

In other words, the selling was temporary. Once the worst was over, investors rushed back into silver and sent it on one of its greatest modern-day rallies.

The silver price has not crashed like it did in 2008. But the pressure on the metal is similar—and once those pressures eased up, the price took off.

We could yet see cheaper silver, but history says the buying opportunity to do so will almost certainly be short-lived.

Add it all up and…

Mike and I and others here at GoldSilver continue to accumulate physical silver. We think it pays off in life-changing ways at some point in the near future.