UPDATED: The Best Time of the Year to Buy Gold and Silver

Can’t decide if you should buy gold now or wait?

Even though gold and silver have long-lasting qualities most other investments don’t, we all want the best price we can get. It’s only natural, and any good consumer will consider the timing of their buying decisions. It’s a question almost every investor asks before executing: Even if I get a good price now, will I be able to get a better price later?

Well, history has an empirical answer for you.

I looked at the historical data to see if I could identify the best time of the year to buy. I suspected January would be best, but what I found was interesting.

We calculated the average gain and loss for every day of the year since 1975 (when it was legal to buy gold again in the US) and put it in a chart. Here’s what it shows:

You can see that on average, gold tends to surge during the first couple months of the year. The price cools down through the spring and summer, then takes off again in the fall. This means that on a historical basis, the best times to buy are the beginning of January, early April, or from mid-June to early July.

You can also see that the price of gold, on average, does not historically revisit its prior-year low. The low of the year is indeed in January—but it’s the low of that year, not the prior year. Obviously, there were years when the gold price did fall—but there were also years it soared. Smoothing out all those surges and corrections and manias and selloffs, investors will get their best price at the very beginning of the year, or the year before.

We ran the same data for silver and here’s what we found:

It’s easy to see silver’s higher volatility. What also sticks out is that historically, silver doesn’t come close to touching the January low. The only other best time to buy is in June.

As with gold, you’ll notice silver typically doesn’t come close to revisiting its prior year price (though there were certainly years when the price of silver fell below where it started). The historical data says that on average, investors will get their best price in early January or the prior year.

Best Month of the Year to Buy Gold

If you missed buying gold in January, when is the next best time to buy?

We broke the historical data down into months, and here’s what it shows: 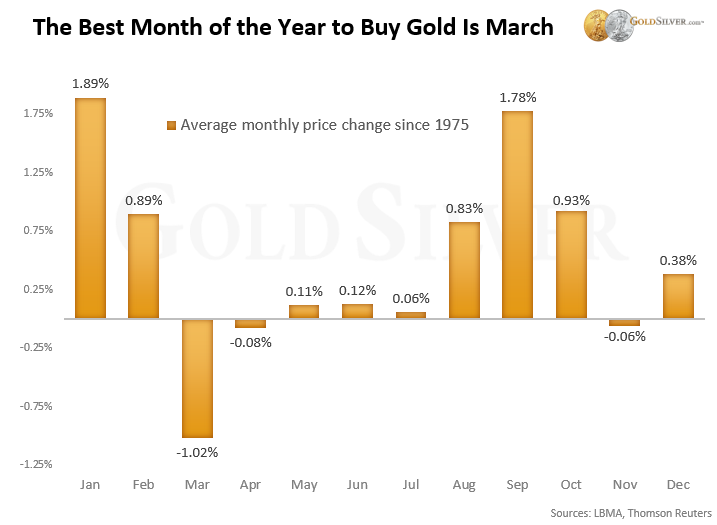 Since 1975, the gold price has dipped the most in March. The daily chart above shows the price in April might offer a slightly lower price, but history shows March is the month gold falls the most and is thus one of the best times to buy.

This trend does not apply to silver: 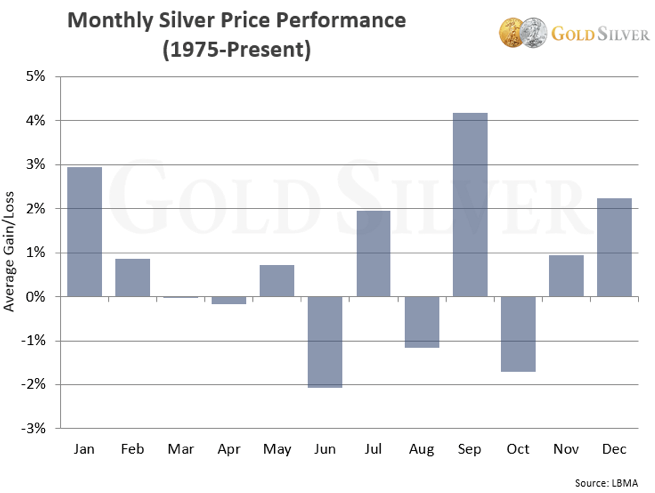 Unlike gold, in March the silver price is typically flat. The best month to buy silver is June, followed by August and September. The wisdom of buying in June is further supported by the daily chart above.

We also looked at which quarter of the year is the best time to buy gold. 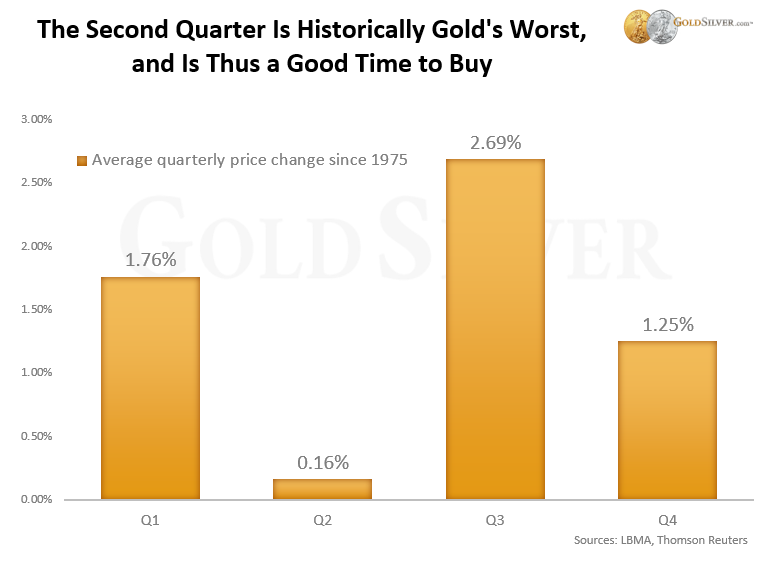 Since 1975, the second quarter (April through June) has clearly been gold’s weakest and is thus the best time to buy. The third quarter (July through September) has been gold’s strongest.

The Best Time to Buy Gold Is…

There are a couple conclusions we can draw from the historical record. When buying gold and silver…

In the big picture, however, it’s less about snagging the exact bottom and more about how many ounces you own. Remember, gold is inversely correlated to other investments, including equities, so you want to have a meaningful amount of bullion before a stock market selloff takes place. If you don’t, the price of gold could very well leave you behind, forcing you to pay not just a higher price but a higher premium.

(If you’re not sure where to start, try the tips in this article.)

We’re not waiting. We’ll buy more if it falls, but the point is, we’re prepared now for whatever the future may hold.

I hope you are, too. If not, I encourage you to buy physical gold and physical silver now to protect your family’s wealth. And if you’re concerned about how much you’ve got stashed in or around the house, think like Mike and consider our surprisingly affordable storage program.

After the Boom Must Come the Bust
Price Inflation Slows, But the Economy Keeps Getting Worse
What Do Initial and Continued Claims Suggest About Timing of a Recession?
Kansas City Fed Services Survey Tanks To -11 In January As Fed Withdraws Monetary Pu...
China and the US at Sovereign Debt War
World War III: Has It Begun?: Rickards
"The Bot Is Out There. It Doesn’t Feel Pity, Or Remorse, Or Fear, And It Absolutely...
Labor Shortage Talk Turns to Job Cuts
IRS Alerts Taxpayers They Must Answer a New Question On Tax Forms Or Face Consequenc...
Americans Fall Behind on Car Payments at Higher Rate Than in 2009: Bloomberg
Pending Home Sales Suffered Worst Annual Decline Ever In 2022, Despite December Surg...
UMich Inflation Expectations Plunge, Democrat Sentiment Sinks
The Core! Core PCE Deflator Declines To 4.4% YoY As M2 Money Stops Spinning At -1.3%...
David Morgan: Algorithmic Traders Could Flood Into the Gold-Silver Sector
Gold: Trader Reaction to April Comex Gold Futures of $1947.90 Sets the Tone on Frida...
More News