The stock market bubble continues to inflate, while the price of silver remains range-bound. But a reversal in those two asset classes is coming, and based on history it could be one for the record books. In fact, you might want to refrain from sipping hot coffee while viewing the tables below…

Back to the Future for Silver and Stocks

To the surprise of many mainstream investors, silver outperformed all major stock indexes last year. It’s more than doubled since the selloff in March 2020. It’s up 6% in 2021.

Yet compared to the general stock market, silver is, believe it or not, still near its all-time low. 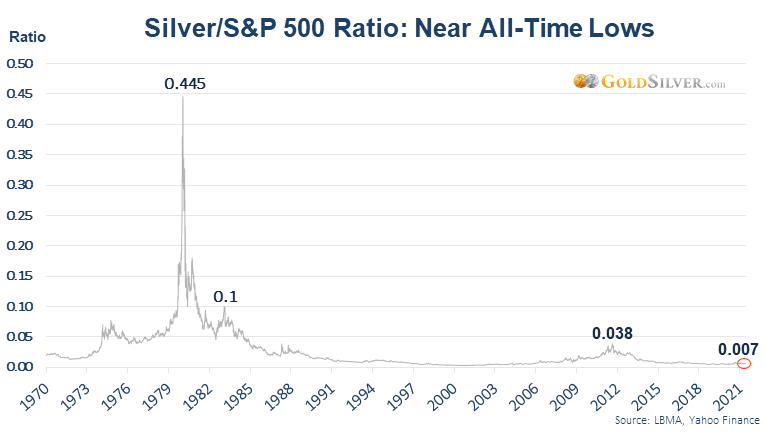 The rise in the silver price over the past year has done virtually nothing to improve this ratio. In fact…

Only at the beginning of the new millennia has this ratio been lower than it is right now.

You can see where it has peaked in the past. Compared to today, the ratio was…

The point here is obvious. If history were to repeat and the ratio returned to any of these prior levels, it means stocks are headed lower (and probably by a lot), while silver would climb higher (and probably by a lot). Sure, since it’s a ratio only one of those things could happen while the other stays stagnant, but the more likely scenario is they both move.

And because the ratio is near historic lows, the reversal is likely to be, well, breathtaking.

Thrills for Silver, Chills for Stocks

The following tables show what would happen to the prices of silver and the S&P 500 if the three ratios above were to be hit from current levels. To keep it simple, the tables are calculated from 4,200 for the S&P and $28 for silver.

The silver price would have to approach $200 before the S&P 500 would avoid any losses.

All this on just a return to the 2011 ratio, which is where we were in the last bull market and the lowest peak in the chart above.

While this scenario is sobering, it only gets worse for stock investors. Here’s what silver and S&P prices would look like if the ratio matched its 1983 high of 0.1.

At this ratio, stock investors would only see a gain if silver climbs to $500—in all other scenarios they lose, and in most cases dramatically.

This is nothing short of a complete wipeout of the broad stock market.

Even a $500 silver price leaves S&P investors losing 74% of their stock portfolio. At this ratio the silver price would have to rise to over $2,000 an ounce before the S&P registers no loss.

Remember, these are not pretend prices, model projections, or wishful thinking on the part of silver bugs. All these ratios have occurred before.

And given where the ratio currently sits, the odds of it moving significantly higher are indeed very strong.

And here’s something to think about: once the reversal in this ratio picks up steam, how do you think the average investor reacts? Would they dump at least some of their stocks and shift to silver?

Throw in the fact that the average investor crowds in near the end and this reversal could get some serious momentum.

Stock-only Investors: How Lucky Do You Feel?

So silver-less investors, I’ll use a famous movie line to ask an honest question: do you feel lucky?

If you remain in stocks and have no exposure to silver, I hope you’re not one of those that end up selling your losing stock positions near their bottom and buying silver near its top, indirectly helping me and my silver friends become richer.

Or instead, given that stocks don’t run up forever, and that silver is deeply undervalued on a relative basis and will almost certainly rise over the next few years, might it be wise to allocate a portion of your portfolio to silver now?

Just don’t wait too long, as silver tends to spike suddenly and violently.

If you don’t own any silver, I encourage you to buy some now. At the current ratio, your risk is very low. Heck, you can even sidestep the current high premium.

And if you don’t buy silver now? Well, like Mike Maloney says, a wealth transfer is coming, and you’ll either be a victim or victor.

Given where this ratio sits, silver investors are destined to be the victors.