One of the articles that elicited a lot of reader feedback was our report on the ratios for gold and silver to real estate. That was over a year ago, and with gold and silver prices rising, it’s time for an update.

Real estate prices are high too, and got another boost when the Fed lowered rates.

So do the ratios remain elevated? And where do they stand compared to the last big bull market in precious metals?

It’s an important question, because we’re convinced the crisis ahead will push these ratios back to their all-time lows, and hand those of us with a meaningful amount of bullion the opportunity to buy a house outright. If we’re right, buying a home someday from the proceeds of gold and silver sales could indeed be very affordable.

Here’s the historical relationship between the price of the average home in the US and the price of an ounce of gold since 1975 (house price divided by gold price). The highs and lows are marked, along with the current ratio as of August 23. 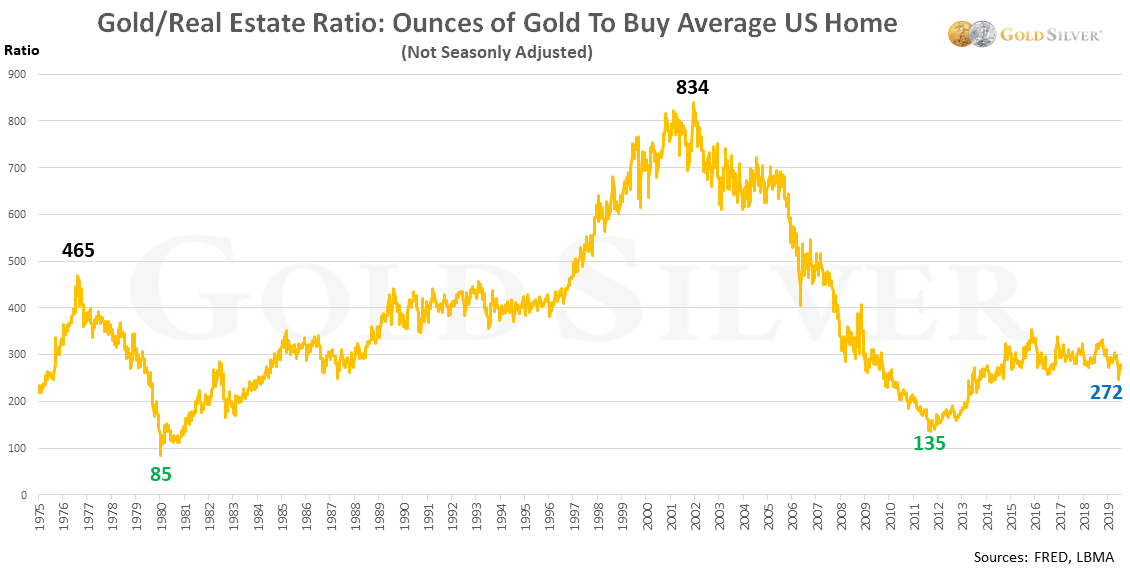 So if we’re right about this ratio returning to its historic lows, and you want to swap gold for a house, here’s what that would look then vs. now.

We don’t want to count our chickens before they hatch, but it’s possible it could take even fewer ounces to buy the average priced house.

That’s because unlike the 1970s, most major asset classes are in a bubble today, something history has rarely witnessed. The global financial system is also much more precarious, particularly when you include widespread negative rates and money printing that wasn’t present then. And debt loads are at all-time highs for most segments of society — government, corporate credit, global credit, student loans, auto loans, and derivatives, not to mention unfunded liabilities for both federal and many states.

Add it all up and it is hard to imagine a scenario where gold and silver don’t soar in the upcoming fallout. So yes, a gold/real estate ratio below 85 is possible, even if that means house prices rise like they did in the 1970s.

But it’s not the gold ratio that has my mouth watering — it’s silver.

Here’s the historical relationship of silver and real estate since 1975, also with the highs, lows, and current ratio (through August 23) marked. 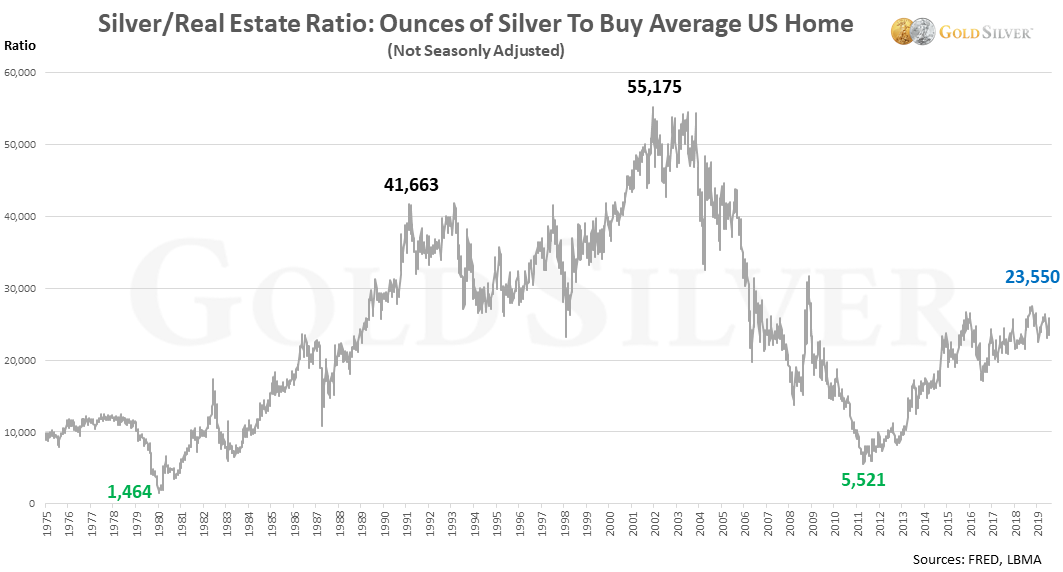 You can see how extreme the readings have been in the past, which, as our readers know, is due to silver’s higher volatility. We’ll use that volatility to our advantage, as we think a repeat of just 1,464 ounces of silver to buy a house (as seen in 1980) is likely.

Here’s what that would look like in the near future, vs. now.

So yes, three mint cases of silver Eagles could indeed buy you an average-priced home at the bottom of the cycle (before taxes). That’s an amount even those with a modest budget can handle.

As with gold, though, the ratio could drop even further in the type of crises we see ahead.