It’s not exactly a surprise, but Merriam-Webster said the 2020 word of the year was unprecedented. Overused perhaps, but definitely accurate.

What will this year bring with gold and silver?

The answer begins by looking at the context of 2020—where we came from and where it left us. So let’s review to see just how unprecedented last year was, including gold and silver’s performance vs. other assets. And then we’ll examine the potential catalysts that are still brewing.

Let’s start by looking at the fourth quarter…

For the most part, the fears of a tumultuous fallout from the U.S. election did not materialize. Then a vaccine was announced by two pharmaceutical companies. These two factors led to gold ending the quarter flat. 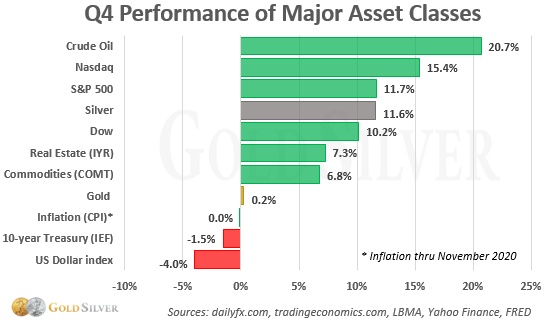 Now let’s look at the full year, the period where we saw…

A Disruption in the Universe

The year began quietly—but then the coronavirus pandemic erupted around the world. The stock market crashed in March, followed quickly by the Russia/Saudi Arabia oil price war, with crude prices dropping as much as 70%.

The economy came to a screeching halt, the inevitable recession officially beginning in February. The World Bank projected this recession will be the fourth deepest since 1870, and the most severe since World War II.

The Covid-19 disease caused widespread sickness and loss of life. Outbreaks and lockdowns became mandatory in many regions, bringing global trade to a standstill. Unemployment and underemployment skyrocketed, though a few sectors of the economy boomed. Virtually all employees began to work from home.

And as if a global pandemic wasn’t enough, the death of George Floyd, at the hands of police, ignited widespread unrest and protest movements across the country. The U.S. presidential election was one of the most contentious in modern history, and geopolitical conflicts continued to simmer. The level of uncertainty and turmoil in 2020 was indeed disruptive in most areas of life.

The Fed and other central bankers responded swiftly with massive stimulus efforts, both fiscal and monetary. The Fed injected more than $3 trillion into the US treasury market within just a few weeks. And for the first time in history it started buying US corporate bonds directly, including junk bonds!

Balance sheets in the Fed, ECB, and Bank of Japan grew by a total of $8 trillion. The same level of expansion took almost eight years to achieve following the Great Recession in 2008.

Not surprisingly, the U.S. dollar weakened, an earnest downtrend in place for the second half of the year. By the end of 2020 the U.S. dollar had reached its lowest level since April 2018.

The stock market began to claw back, eventually reaching new all-time highs. Gold rebounded big as well, hitting all-time highs in August. It weakened after news of the vaccines came out, but it was indeed a banner year for humankind’s oldest asset. 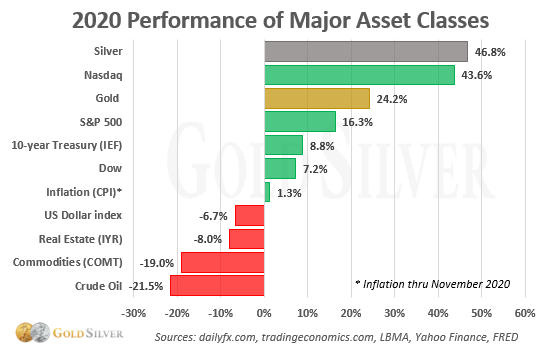 But the best performing precious metal for 2020 was silver, up 46.8%. It even outperformed the tech-heavy Nasdaq, home to many stocks that benefited from the virus fallout.

Meanwhile, most bullion dealers were stretched to extremes, grappling with overwhelming demand pitted against strained supply and delivery delays. At one point the Comex was forced to source supply from London to meet demand.

2020 was the year of many things, but it was one that definitely showcased gold’s ability to respond to crisis and turmoil, along with silver’s runaway volatility when investment demand spikes.

While the vaccine is a positive step for the world, there are new realities to confront as the economy tries to heal. A number of potential catalysts continue to brew that signal the need to continue accumulating gold and silver…

Monetary and Fiscal Stimulus: The Fed’s balance sheet grew to more than $7.1 trillion last year; the previous high was $4.5 trillion in the wake of the 2008 financial crisis. As the new year started, Chicago Fed President Charles Evans said we should expect this to continue. “The Fed’s policy stance will have to be accommodative for quite a while… economic agents should be prepared for a period of very low interest rates and an expansion of our balance sheet as we work to achieve both our dual mandate objectives.”

On the fiscal side, Goldman Sachs said the probability of a fiscal stimulus package of at least $2 trillion has sharply risen. Monetary stimulus, in all its forms, is arguably one of the strongest catalysts for gold, not to mention the ramifications that can and will result from it.

Low Interest Rates: The Fed has signaled ultra-easy monetary conditions for at least the next year. And with the “real” rate already negative, gold will continue to see support. Gold could move higher even if stocks do, as long as monetary and fiscal conditions remain accommodative. The ideal solution for investors is to hedge any risk assets with gold.

U.S. Dollar: One consequence of monetary and fiscal stimulus is a weaker U.S. dollar. Its vulnerability has not gone unnoticed by many investors; based on CFTC data, net short non-commercial futures linked to the ICE U.S. Dollar Index surged in December to their highest level since March 2011. A weak dollar is supportive of gold, and could continue to provide support despite the worldwide vaccine rollout.

The exception here would be if the Fed changed its stance if the virus is contained and began to scale back from its asset purchase program, a hawkish move that would likely lift the dollar index and be a headwind for gold.

Inflation Threat: The fiscal and monetary stimulus genie is out of the bottle! Western governments have essentially promised to continue stimulus efforts through 2021, if not longer. Excess currency creation can be a catalyst for inflation, and by extension gold.

Debts and deficits have reached record territory, which historical studies have shown lead to higher rates of inflation. The federal debt ended 2020 at 135.6% of GDP, a level unmatched in modern history. And the federal deficit is now $3.2 trillion, more than twice the level of the Great Recession and a level not seen in U.S. history.

Meanwhile, the December PMI revealed that while new orders dropped, input prices rose. In the case of the services PMI, input prices jumped to the highest on record for the second straight month, while input prices in the manufacturing survey hit the highest level since mid-2018.

Commodity prices have also jumped. Many are up double-digits from a year ago, with lumber prices up triple digits.

Last, if one subscribes to the theory that inflation can’t happen without higher wages, I’ll point out that higher minimum wage rates kicked in this month in 20 U.S. states. And four more states, plus Washington DC, will raise their minimum wages later in the year.

If rising consumer prices visit us in 2021, investors are bound to look for inflation hedges, gold and silver being obvious choices.

Future Covid Variants: It’s the last thing anyone wants to hear, but a new variant of COVID-19 appears to have emerged in the UK and South Africa. This could extend lockdowns and border closures. We also have to consider the possibility the current strain of the virus isn’t contained. Either of these could easily lead to a…

Prolonged Recession: Despite the U.S. stock market sitting near record highs, many businesses continue to struggle, with ongoing closures still being reported. Bankruptcies are likely not over, nor is elevated unemployment levels.

Bullish Outlooks: A number of banks expect gold’s bull run to continue in 2021. To mention a few, Credit Suisse projects gold will average $2,100 this year, while Goldman Sachs sees $2,300 (who also purchased the Perth Mint Physical Gold ETF). Investment bank Jefferies expects gold prices to average $2,200, and analyst Ross Norman, who has one of the most accurate track records for gold price predictions, sees gold rising another 20% this year.

Silver Outperformance: Part monetary metal like gold, but also an industrial metal whose uses would climb in an infrastructure and clean-energy spending spree proposed by Biden, this dual role could easily push it to advance more than gold.

Black Swans: Last, the environment remains ripe for a black swan. Potential candidates include a messy Brexit, a less-than-effective vaccine, or a stock market or real estate crash. Another shock to the global economy would put a spotlight on gold’s hedging abilities, just like it did in 2020.

The current environment of negative real yields, a weak dollar, rising inflation expectations, and ongoing monetary and fiscal stimulus creates an ideal scenario for gold. The uncertainty surrounding the Fed’s diminishing ability to respond effectively to crisis only adds to the importance of holding gold.

The most likely scenario for 2021 is one where gold continues to offer not just a meaningful and necessary hedge, but also the high probability of yet another set of record prices. Silver is likely to again outperform.

We recommend investors continue to accumulate gold and silver in 2021, a year that seems highly vulnerable to a plethora of financial, market, and monetary risks.