What Happens to Stocks at the End of Bull Markets

Here’s What Historically Happens to Stocks When Bull Markets End

You undoubtedly know that 2017 and 2018 have been record-setting years for the broad stock markets. While 2018 saw a 6-month slump after hitting record highs throughout January, the correction soon ended, with the Dow Jones reaching new highs in late September and early October.

In a time of bull markets for stocks, investors seldom bother to look elsewhere. Gold was up in 2017 despite numerous headwinds, and even major banking institutions are bullish on its future prospects. But most mainstream investors aren’t paying much attention to gold since they keep seeing so much green in their stock portfolios.

Even I was taken back by some of the data from the bull market in stocks:

This all begs the question: is the bull market about to come to an end? This is exactly the kind of frothy behavior a market sees near its apex, so it’s definitely a prudent question to ask. We all know what happens to stocks in a bull market — they keep going up. But what about when the bull loses its horns? The year is coming soon when the bull market reaches its peak. What does history say could happen to stocks in the first year of a bear market? 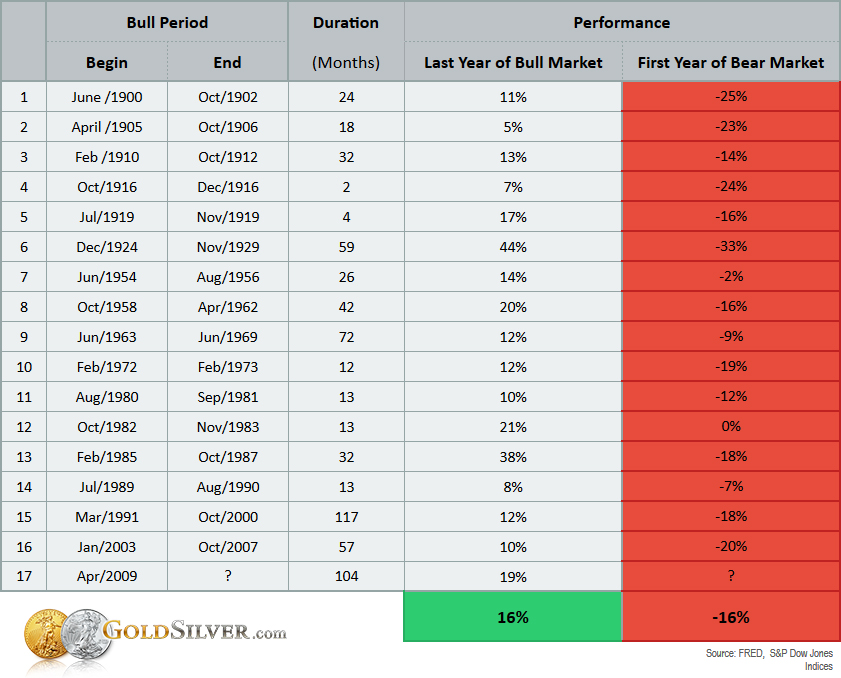 What can we learn from this data and from the current market? Consider:

The bottom line for us is that we think a major shift is coming — not just in overpriced stock, bond and real estate markets, but in the currencies that have been abused by many central bankers the world over. Once the process gets underway, the mainstream will turn back to mankind’s oldest form of money in mass, and our patience and forethought will pay off.

Mike and I continue to buy physical gold and silver. If you’d like to follow our lead, you can order American gold Eagles and silver Eagles now along with other popular precious metal coins in a variety of weights, designs and quantities.