Why Is Silver Stagnant, and When Will it Start Moving?

It hasn’t been fun for silver investors. Gold has moved higher in response to the crisis, but silver has been nothing but weak and vulnerable this year.

Is this silver’s destiny? Is this all that we can expect for the foreseeable future?

No. History says a big change in the silver price is coming. We’ll look at that, but first let’s examine why, at this point in the crisis, it’s been so lifeless…

Silver at the Onset of Crisis

We’ve fielded a lot of questions on why silver isn’t rising right now, in the midst of the biggest crisis in modern times. And at a time when gold is rising.

But actually, the lag in the silver price is historically normal behavior when these types of crises first strike…

The two biggest effects of the pandemic have been a stock market crash and a hit to economic activity. How has silver performed during these events in the past?

First, here’s how both gold and silver prices have performed during the eight biggest stock market crashes before this one. Green means it was a positive return, yellow means it fell but less than the S&P 500, and red means it fell more than stocks. 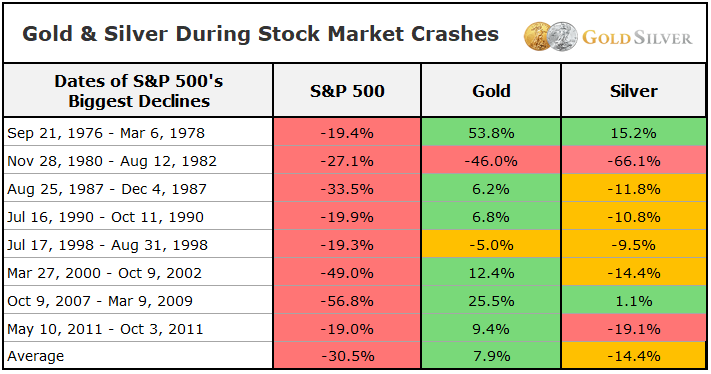 You can see that gold rose in every instance but two, with one of those declines less than the S&P 500. And we should point out that the 1980-1982 period was right after gold’s biggest bull market in recorded history, so the selloff wasn’t exactly surprising. Overall, a pretty good track record.

But for silver it was almost the opposite. Over the past 45 years, it has risen in only two of the biggest stock market crashes (one of which was only 1%), and fallen in all the others. It did fall less than the S&P 500 in five of those instances, but more in two of them.

This data suggests that in the throes of a stock market crash, a decline in the silver price is historically normal behavior, even though it’s usually less than the S&P 500.

What about during economic slowdowns? While we haven’t officially entered a recession, it’s clear one is on the way.

Here’s how silver has performed during the past seven recessions in the US, going back 50+ years... 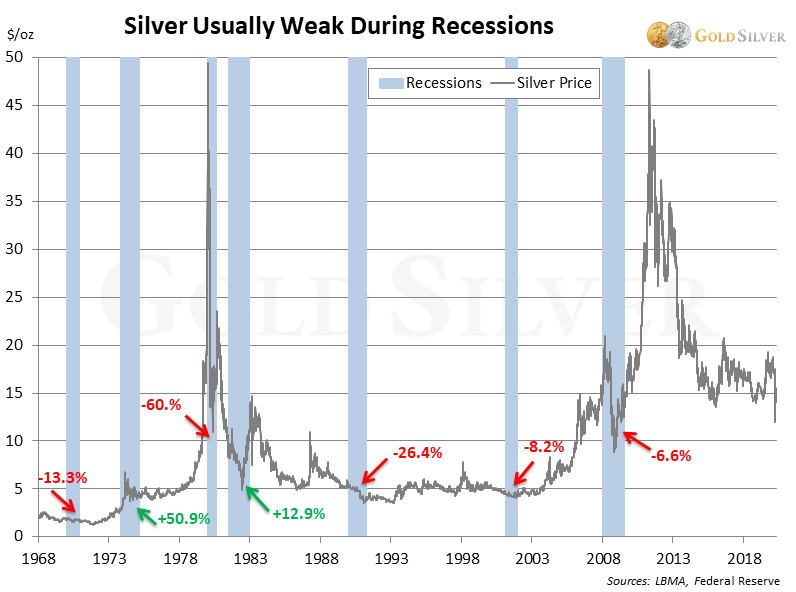 In the last seven recessions, the silver price fell in five of them, and rose in two. The range in returns has been wide, including some gains, but overall silver has not logged a strong track record during recessionary periods.

This is in stark contrast to gold. 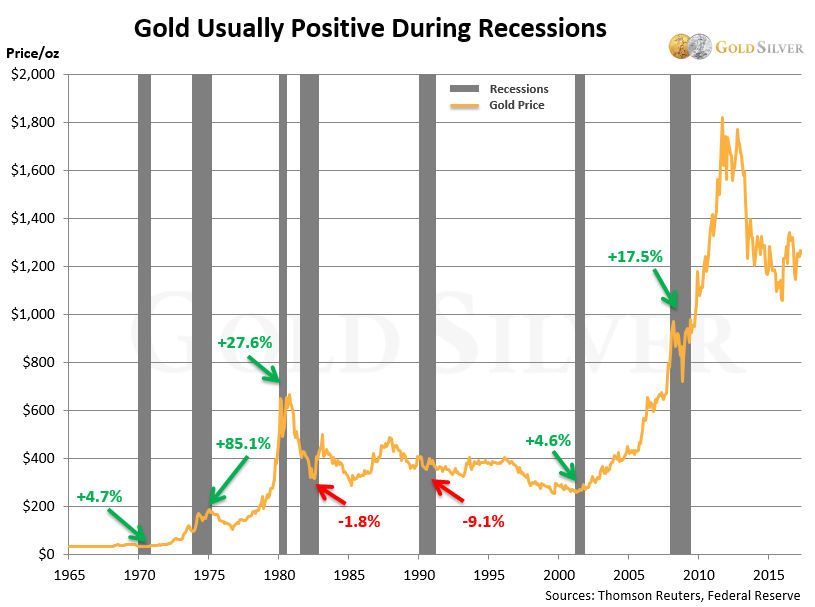 Gold has risen in five of the past seven recessions. And in the two it fell, the decline was only by single digits.

This data specifically tells us that silver is not highly responsive to a stock market crash or a recession.

This isn’t terribly surprising. In 2019, 81% of silver supply went to non-monetary uses—industrial, jewelry, silverware, solar, etc. If economic activity declines, demand for these uses, for the most part, would also decline. If investors are scared by a crash in stocks or the onset of a recession, they tend to flee to gold first.

In other words, silver’s recent price behavior, based on the last 50 years of history, is normal.

So what is going to push silver higher? And when?

There are a lot of potential catalysts, but three stick out…

Inflation isn’t on the radar of most investors right now, but given the extent of currency abuse, especially the Fed’s public admission that QE is “unlimited and open-ended,” it seems unwise to assume inflation isn’t a future reality. And it could get here sooner, and soar higher, than many think.

And silver’s two biggest modern-day rises have occurred during inflationary environments: the runaway inflation of the 1970s, and when investors feared inflation during the Great Recession.

Here’s how much silver rose during those periods, plus what the silver price would reach if we matched them from today’s $15 level:

Based on the massive amount of currency abuse underway and the inflation that is likely to result, prices in this range seem not just realistic but likely.

This isn’t a catalyst, per se, but it’s a fact worth revisiting: silver historically has a longer fuse to ignition than gold.

I’ve shown this research before, but it’s a good reminder since we seem to be in the middle of this reality right now…

In the five precious metals bull markets in modern history, silver typically lags gold—then catches up and passes it. 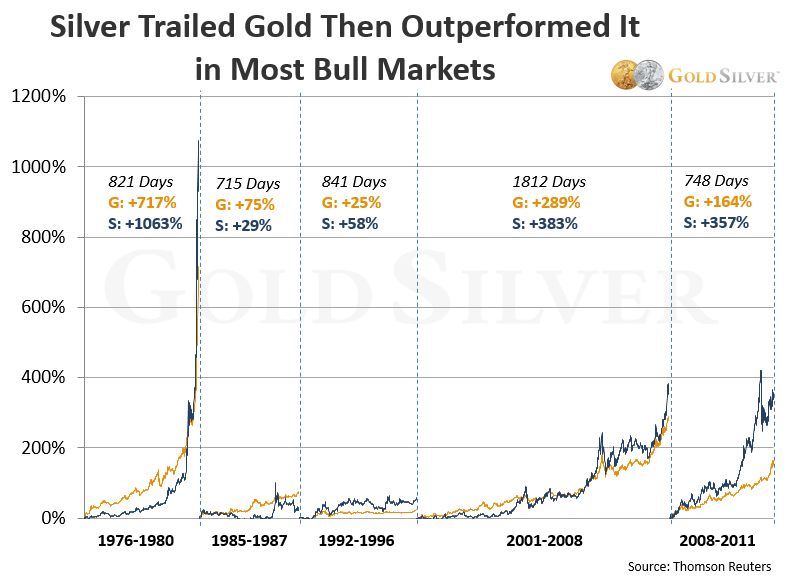 This is yet more evidence that silver’s current price behavior is historically normal.

The reason for this is again because investors turn first to gold in the initial shock of a crisis. It’s the reflexive go-to asset when fear and uncertainty strike. As gold becomes more “expensive” investors then turn to silver.

Silver hasn’t entered that “catch-up” phase yet, so let’s insert the current price into the 1976-1980 bull market and see where we might stand in historical context… 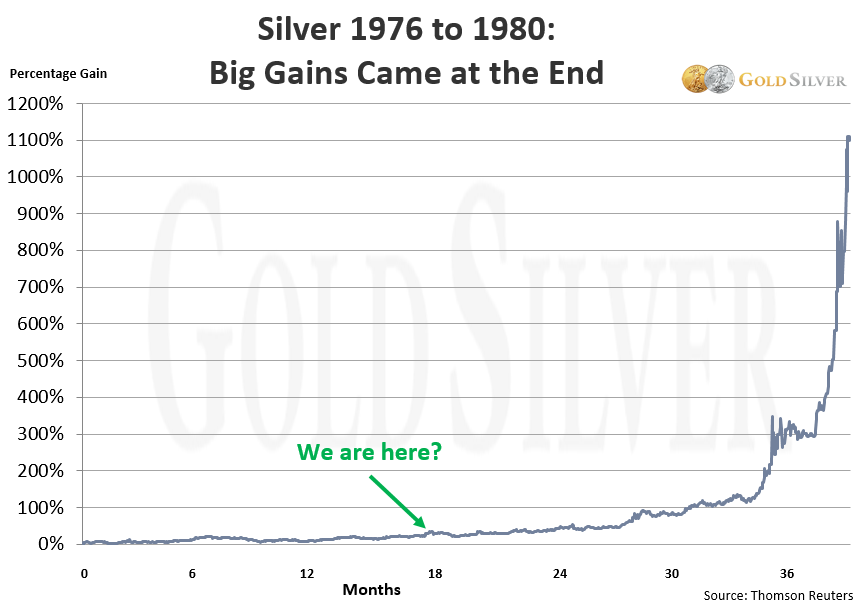 The arrow points to the same percentage rise we have now as when it was first seen in the 1970s bull market. It took another year for the price to really get going, but once it did, the returns were spectacular.

Imagine how silver investors felt back then… some of them surely thought silver wasn’t rising “like it should be”, especially when there were crises all around them—a recession, skyrocketing inflation and mortgage rates, high unemployment, an energy crisis/oil embargo, among other events.

Yet if they let that discouragement push them to sell, they would’ve missed out on one of silver’s biggest bull markets; the price doubled within 18 months, and allowed investors who held to the top to add a zero to their investment. Eventually, investors turned to silver in a big and life-changing way.

[If you inserted the above arrow based on time instead of percent rise, it would be back at “1” since the low was last month.]

By the way, the Silver Institute just released their report on 2019, and among other things concluded that “silver will outperform gold later this year.” They think the “catch-up” phase starts before 2020 is over.

History says the silver surge is coming. It means we should hold on and make sure we have the amount of metal we want.

The next catalyst is probably the biggest of them all…

Mike Maloney does a better job at explaining what’s next than I can. And why it will have a huge impact on the silver market.

The short answer is that while we’re currently in the middle of a huge deflationary dip, what comes next is big inflation (maybe even hyperinflation). This deflationary period could last another year or two, but inflation will come at a point when the government has sent people enough cash to where they feel like they can go out and spend again. And it’s probably going to take a LOT of currency creation to get the baby boomers, who are now scared and out of time, to do that.

When the real-world effects of this massive currency destruction begin to set in, the rush to silver (and gold) is likely to be enormous.

If you haven’t watched it, check out episode 7 of Hidden Secrets of Money to see Mike lay out the case for this “velocity of currency” effect.

Keep in mind it’s not necessarily just about inflation, but any monetary effect—the US dollar, debt, deficits, or a coming black swan that is yet to be quantified or seen.

Indeed, there are so many potential catalysts that it’s hard to imagine a scenario where silver doesn’t rise.

Either way, as Mike says, “it’s all happening right now. Be prepared.”

If There’s a Recession Coming, Not Even the Fed Could Stop It Now: Barron's
More News