Don’t Look Now, But India Is Loading Up on Silver

It’s quite possible that a new catalyst for silver is emerging.

It didn’t make a lot of headlines, but India’s silver imports have seen a big jump. So big that we need to talk about it, because if this trend continues it could have a sizable impact on the tiny silver market.

There’s a chart I want you to see, but first…

How Important is Indian Demand?

We all know that India is a big gold buyer. The country is the second-largest global consumer of gold, but there’s evidence they’re the biggest consumer of silver—some think it might be China, but their data is not always transparent.

Either way, India represents a bigger portion of global silver demand than most investors realize. Between jewelry, religious objects, and investment, one of every six silver ounces in the world is gobbled up by Indian demand. 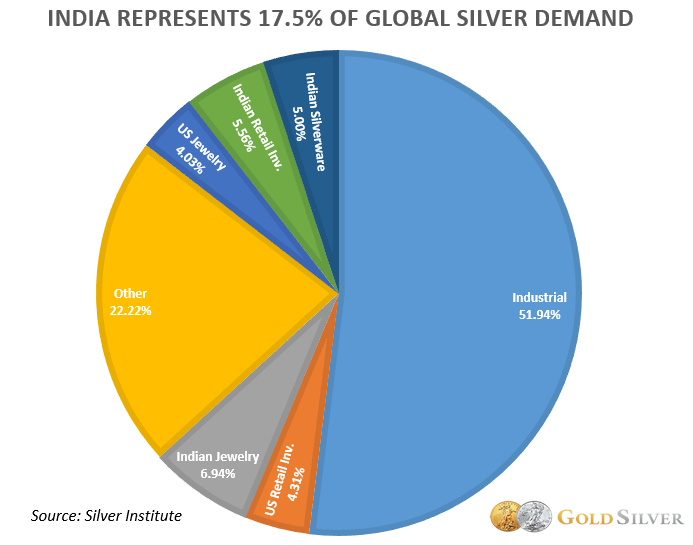 With already such a big part of the pie, a spike in demand would take silver away from the rest of the global marketplace.

Well, there’s a spike in demand…

The gold price jumped this summer, but silver less so. This kept silver as the better bargain between the two precious metals.

This affected buying habits with a lot of investors—including Indians. Gold imports plunged in August, to 32.1 tonnes, the lowest monthly total in three years. But silver imports spiked that month, to 543.2 tonnes, a whopping 72% higher than a year earlier.

In other words, it appears Indian investors were swapping gold for silver.

The thing is, it wasn’t just August. The jump in silver imports has been going on all summer. Add up June/July/August silver imports this year and compare them to last year and this is what it looks like. 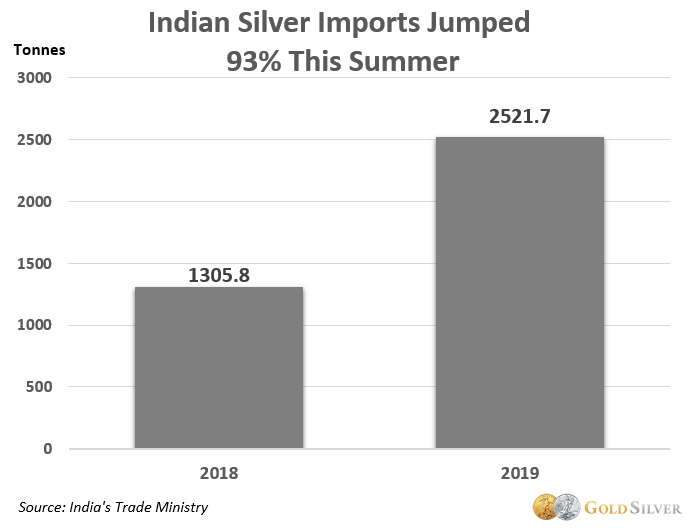 India’s silver imports from the three summer months have almost doubled from a year ago.

Is this the beginning of a new trend?

It’s certainly possible. Analysts report that silver has been seeing wider use in India—in electrical components, religious occasions, and weddings. Also, “the whole market structure has changed, as jewelry designs have evolved and are more in line with what millennials want” says a consultant at Metals Focus.

From Silver to Gold—Back to Silver?

Not many investors know this, but India was once the world’s #1 buyer of silver long before it was the world’s top gold buyer. They bought so much silver, in fact, that in the early 1900s the government ran into similar fiscal problems then that it has today with gold.

Why did Indian citizens shift from silver to gold? Demand for silver was so high that to get control of their finances, the government more than doubled the import tariffs in 1910, from 5% to 11%.

Not surprisingly, silver demand fell 29% by 1912 (according to a report by gold wholesaler Pixley & Abell).

The fall in silver demand was attributed to not just tariff and tax increases, but also due to a substitution of gold for silver in people’s savings, because gold became more affordable on a relative basis.

So we have historical precedence that not only have Indians been huge buyers of silver, but have willingly and overwhelmingly turned to another precious metal when one got too expensive or difficult to buy. It’s thus not a stretch to think that they could do it again.

So what could happen to silver demand if this trend continues?

Here’s the chart I want you to see…

If Indians were to shift back to silver from gold, it could be a boon for the price. Here’s how…

Let’s suppose that Indians shift just 10% of the cash from what they would normally invest in gold and instead buy silver. Look what would happen to silver demand within the country. 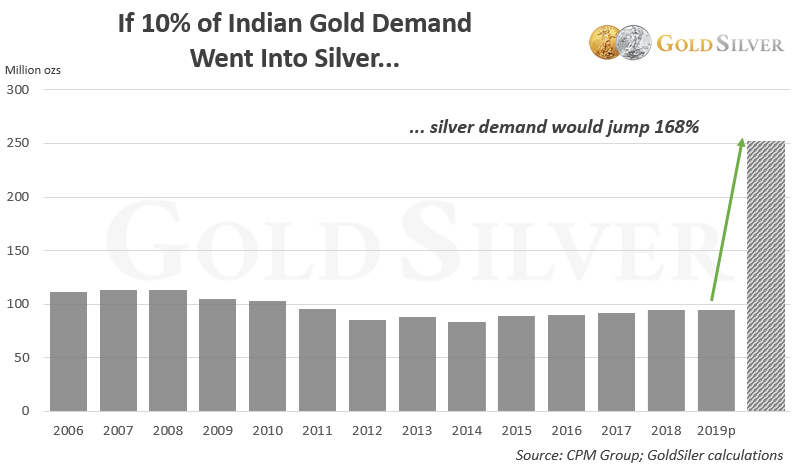 A 10% switch from gold to silver by Indian citizens would result in an incredible 168% jump in silver demand. It would require an additional 153 million ounces of supply to meet their needs.

As any good silver bug knows, this amount of silver is not available. Mining and scrap could never fill a gap of this size, starting with the fact that silver supply is already locked into a global decline.

If this trend gains traction, the pinch on silver demand would be real, and global. And the silver price would be forced higher from this factor alone.

All this from just a 10% shift. Keep in mind that when Indians switched from silver to gold 100 years ago, it was a lot more than just 10%.

The bottom line is, we all know what a supply/demand crunch can do to the price of an asset, and we may have the makings of a new catalyst here for silver.

Combine this with the historically high gold/silver ratio, where silver outperforms gold as the ratio falls, and we could be on the verge of an historic run in the price.

Hold on, silver bugs, this is gonna get fun. Make sure you own enough silver to take advantage of the big days ahead.