• Lead article: Silver is Stupid Cheap!
• Gold Theme Updates: our library of articles is growing, and this month we have many updates, + a couple new videos with Mike and Jeff!
• GoldSilver’s Latest Product Releases, including two proprietary silver rounds!

Here’s What “Stupid Cheap” Looks Like: The Inflation-Adjusted Silver Price

A lot of readers liked the inflation-adjusted gold price chart we highlighted last month. It showed how dramatically undervalued it is, as well as how high it could reach when using the 1980 inflation formula.

Many of you asked to see the same chart in silver. Well, we aim to please. And what you’ll see below shows that silver’s undervaluation is even greater than gold’s.

Why We Must Adjust For Inflation

When trying to put the price of a particular asset into perspective, you have to adjust it for inflation. If you don’t, the long-term view is distorted and can lead to erroneous conclusions. It’d be akin to preparing your income taxes using 1980 forms.

However, as we also pointed out, there’s a trick to adjusting for inflation, especially the longer the time frame. And the trick is this: inflation measurements have been changed numerous times over the years. The methodology used to calculate the Consumer Price Index (CPI) has undergone at least 14 alterations since 1980. If the yardstick used to account for inflation has been modified that many times, how accurate can that yardstick be over long periods of time? It can’t.

I asked John Williams of ShadowStats to give me an apples-to-apples inflation adjustment for silver. Essentially, John inflation-adjusted the price of silver using the 1980 CPI formula.

Here’s what his data show. 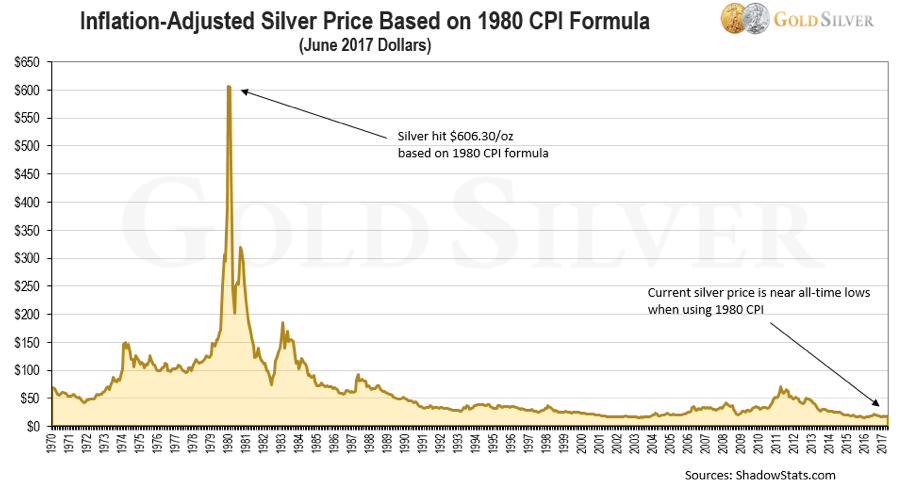 If we use the 1980 formula to measure inflation, you can see the current price is near all-time inflation-adjusted lows. In fact, silver is selling below 1970 levels!

You can also see that its 1980 peak would be the equivalent of $606.30 per ounce today. Silver may or may not get that high, but this shows just how great the potential is.

So, not only is silver dramatically undervalued at current prices, its potential upside is enormous. Check this out:

Even if silver never approaches this level, it’s clearly undervalued at current prices. It is a Best Buy.

Is Silver’s Sale Price About to End?

Silver is also a Best Buy right now because of seasonality. If you click the above link you’ll see this chart that shows when silver historically has its biggest dip of the year.

The second half of June is when silver has, on average, its largest correction of the year. You’ll see the decline tends to reverse right after the 4th of July holiday. And it historically ends the year roughly 9% higher.

There’s no guarantee that price behavior will repeat this summer, but if seasonal tendencies do play out, your window to buy silver at its cheapest price of the year may be about to close.

Keep this in mind, too: premiums tend to spike when prices do, regardless of direction. In 2008/2009, Mike and I saw some dealers charge as much as 90% over spot for silver Eagles! We’ll see premiums spike like that again when demand soars. In contrast, current premiums are low.

Overall, though, I personally don’t worry about what “might” happen to the silver price. I continue to accumulate now—current prices represent tremendous value… the amount of protection relative to the degree of risk in the markets dictates I be overweight physical metals… and the potential upside from current prices is tremendous.

I hope you’ll join us. Here’s what we’re buying now.

Lots of updates this month on the themes we’ve covered in prior newsletters (click on the link to read the original article).

A major shift is underway in how China imports gold. Ten years ago almost all of it came through Hong Kong, but now a third of it is shipped directly to Chinese banks, dealers, and exchanges. 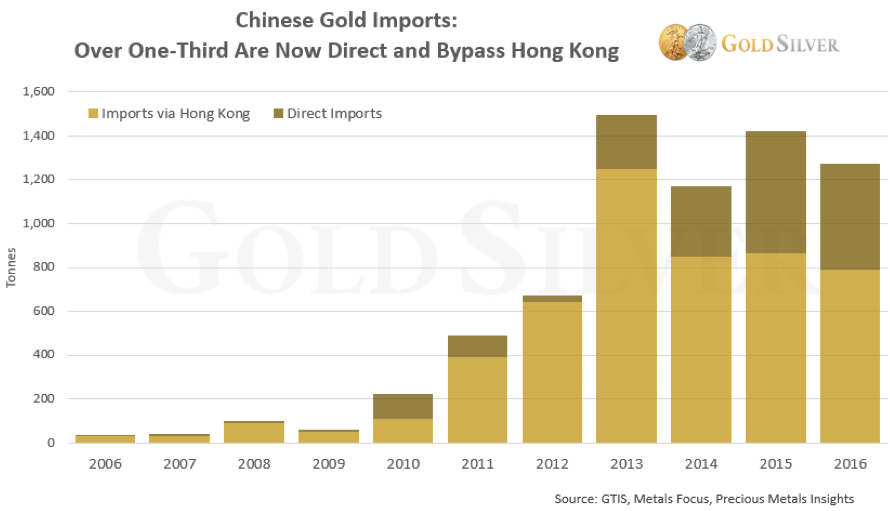 You’ll notice this trend is growing, too.

Keep this in mind the next time you see a mainstream headline that says Hong Kong imports are down—now you’ll know why, and that it’s only part of the picture.

Tax on Gold in India

The government recently announced the new tax on gold in India, called the goods and services tax (GST). Look how much they’ve increased the taxes on gold in just the past few years. 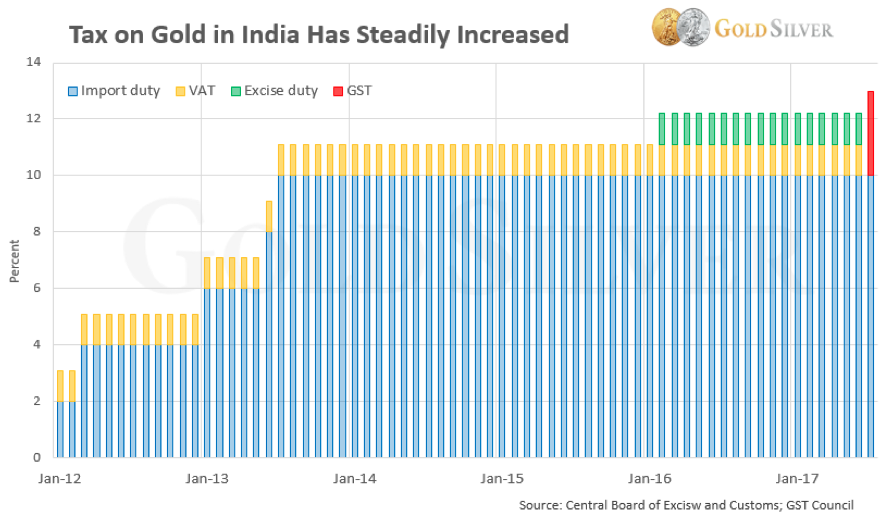 Many jewelers in the country stocked up on gold prior to the tax hike being announced, so imports were up almost three-fold from a year ago. Silver imports also surged, rising a whopping 1,020%.

Some analysts say the tax increase was not as bad as feared and so imports should stabilize. We’ll see, but keep in mind that massive amounts of gold are smuggled into the country and don’t show up in import numbers.

Metals Focus reports that global gold production will decline beginning in 2018. It may have already started, since mine output fell by 0.4% in Q1. The consultancy says that “2017 will bring to a close nearly a decade of continued growth in mine production.”

A decline in new gold supply is coming, folks. See our original article for the potential fallout.

How to Buy Gold with Bitcoin

As Mike indicated a couple weeks ago, he swapped out some of his bitcoin for silver. The price of bitcoin had soared, while the silver price remained low, so he thought it was time to trade. If you’d like to make the same move, or are wondering if you should buy some bitcoin, see our how-to article, which also covers Bitcoin’s advantages and drawbacks.

I interviewed Mike on a variety of silver topics—when prices might rise, JP Morgan’s massive physical holdings, silver vs. cryptocurrencies, and more. Our producer wants us to do these Q&A videos more often.

What’s the Meaning Behind the Shield on the GoldSilver Products?

A number of customers have asked about the shield that appears on many of our proprietary silver rounds. It signifies Mike’s personal and professional philosophy—which might have some meaning for you, too.

The Shift Is On: Why Institutional Investors Are Buying Gold Again

I interviewed a trader about the growing interest in gold from institutional investors that he and his team have witnessed. Check out why. I’ll point out that a number of other gold websites have picked up this article, several commenting that they liked the charts.

By the way, this is a good article to send to anyone who’s wondering if they should buy some gold, or someone who’s even skeptical… it’s hard to ignore the one big reason the big money is shifting to gold.

How and Where to Buy Gold Bars (VIDEO)

We made this how-to article into a video. It’s a great resource if you’re new to buying bars, or know a friend or family member who’s considering a purchase.

GoldSilver released two of our own products last month. If you missed the announcements or want to diversify your physical holdings, check these out (click on the link to view the product and to order):

•  One-ounce Silver Bull Round. Mike personally oversaw the design of our new round. It’s one of the lowest-premiums silver rounds available in the market.

•  One-ounce Athenian Owl Silver Round. This exclusive GoldSilver product has a limited mintage. Not only is this a beautiful round, but your investment can potentially grow in value faster than mass-produced sovereign coins and private minted rounds, due to its limited availability.