Silver Mine Grades are Plummeting—What Does it Mean for Your Holdings?

Silver mines aren’t pulling the same amount of metal out of the ground as they used to, which means less and less silver is coming to market.

Why is less silver coming out of the ground? There are a number of reasons, but there’s one in particular that has sidestepped the notice of most investors, and it may surprise you to find out just how bad the situation has gotten. Let’s look at that reason and what it means for you...

Of course, long-time readers have heard me outline before that new supply from silver mining is locked into a structural decline.

“Structural,” meaning there are barriers and impediments embedded into the silver mining industry itself that cannot be easily or quickly changed.

They can’t just flip a switch and reverse years of problems.

This has ramifications for us investors—which are all good if you hold physical metal. Here’s what I found…

The firm ResearchGate.net examined the grades of the 12 biggest primary silver mines in the world. They specifically measured the “mill feed” grade, which is the grade of the ore going into the mill. Their data only goes through 2016, but look what has happened to the average grade of these deposits over the past 10 years. 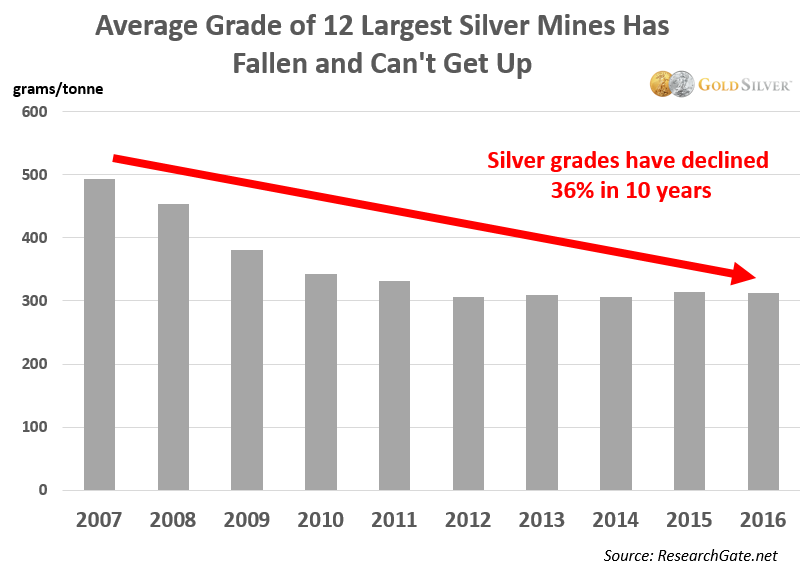 The average grade from the 12 largest silver projects in the world has declined a whopping 36% in just one decade!

This is one big reason why new supply of silver has rolled over and begun a global decline. If you have less metal to dig up, less metal goes to the market.

Why are ore grades lower?

When silver prices fell off a cliff in 2013, many companies began to high grade—digging up the richest portions of their deposits—in order to maintain production levels and earnings.

Now it will take substantially higher silver prices to make that ore economic, and in some cases it never will be.

This phenomenon has affected company reserves, too. Reserves are basically the amount of metal the company has in the ground. This legal term carries the highest confidence rating in how many ounces a company really has.

Check out the decline in reserve grades of the same silver mines. 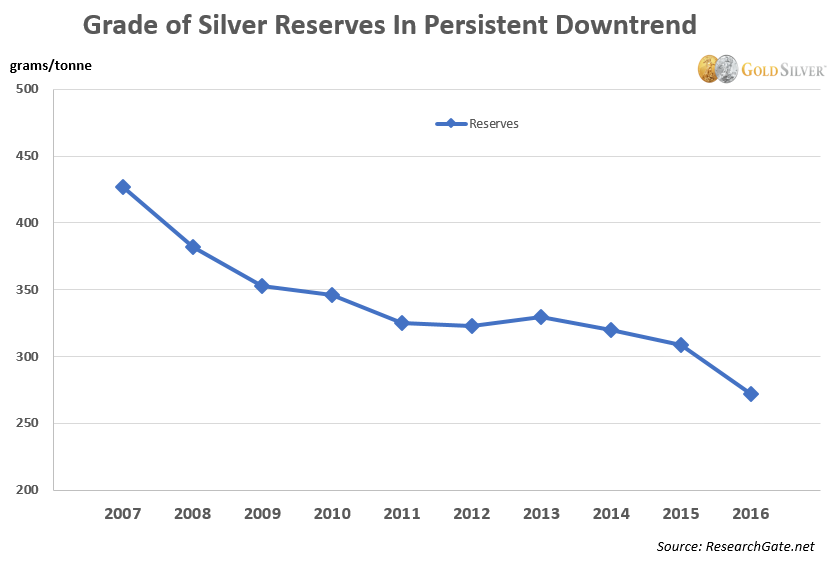 Reserve grades from the 12 largest mines in operation today have declined nearly 40%. This would be an incredible drop for any sector. You can’t have this kind of falloff and not expect there to be no consequences.

Other projects are coming online that could slow this trend (and you could potentially profit from some of them), but it will take a LOT of them, ones with big and rich deposits, since this downtrend is in such an unrelenting downward spiral.

Okay, you might ask, what about “resources?” Resources, like reserves, are an estimate of ounces in the ground, but are classified at a lower confidence rating than reserves. They still have a “reasonable prospects for economic extraction,” but companies try to “prove them up” into reserves, because it increases the confidence is exactly what a deposit contains and thus opens the door to more investors.

But that ain’t the case, as the red line shows… 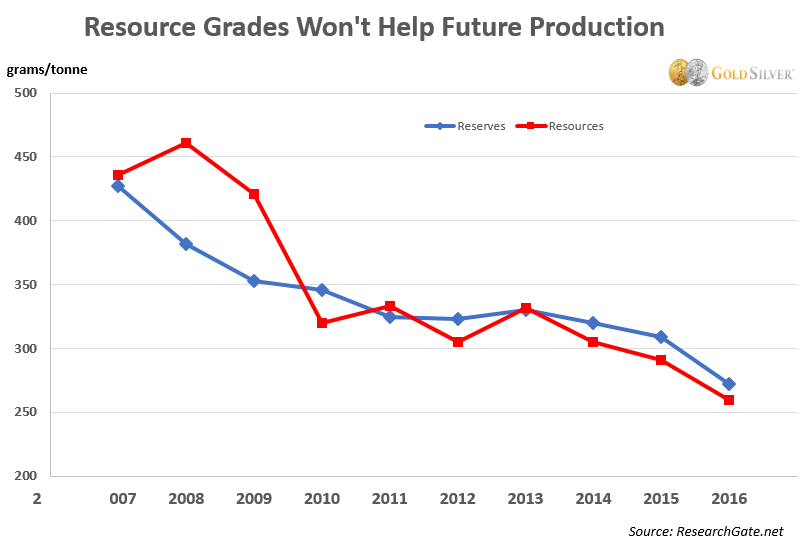 Resource grades have declined even more than reserves!

Why is all this important? Because most of the bullion you and I buy comes from newly-mined silver. Secondary sales (products that have been previously bought and sold) will always have a place in the bullion industry—and a growing role in a supply/demand crunch—but to be prepared for the kind of rush Mike Maloney sees ahead, mine production will need to be healthy and rising. It is neither of those things.

And not just higher prices, but sustainably higher prices. In other words, management teams will have to be convinced silver prices will stay high before they’ll invest millions—sometimes billions—of dollars in new projects. They don’t have the ability to lower costs much further than they’ve already done, so this is the only realistic way to reverse the downtrend in mine supply from the primary silver producers.

I know a fair amount of silver mining executives, and I can tell you firsthand that while there’s a constant focus on replacing the ounces they produce, they are not about to pour seven-figure amounts of cash into a project unless they’re absolutely convinced—along with all the investors and bankers and funds and financiers backing these projects—that the silver price will be high enough, long enough, to make a profit for years and years to come.

The only other possible solution is if they discover a high grade deposit that can produce metal at a much lower cost. But most companies aren’t looking for them. And if they did have the funds for a substantial exploration program, those deposits are fewer and fewer in number… or are harder and harder to find… or they’re located in increasingly hostile political environments… or environmental concerns take precedence… or they’re too expensive to prove up.

And in all cases it takes years to develop them. Turning a new project into a mine is the opposite of turning on a light switch; it’d be akin to building a super-highway in the middle of a rainforest.

There’s no doubt at this point that silver supply is going to tighten further.

How this affects our holdings seems clear:

I’ll let you draw your own conclusion. But I’m with Mike on this: I’m buying more silver.