If Silver Could Talk: What She Told Me When I Wrote to Her

I wrote to silver last week—yes, the physical metal herself, the one we trust and convert our paper dollars to. And as luck would have it, she wrote me back!

I’m a big fan. Your industrial uses in our modern society are exploding, and you’ve been money for as long as records have been kept. It’s hard to imagine your monetary value losing stature, especially when I look at the abject destruction of our currency by central bankers and politicians today.

Which is why it’s amazing to me that you’re so unappreciated in the present.

I’m incredibly excited that I get the opportunity to acquire you at half the price from your near record high price set  10 years ago, especially when all the reasons I’ve been buying you are even more important today. I fully understand the explosive potential you hold, but I have to admit, the wait can sometimes be frustrating for me and my friends.

Is your price weakness almost over, or is it here to stay?

I understand your frustration. The past 10 years have not been fun.

But I have good news for you and your fellow investors. Things will soon change—and when they do I can assure you that you will be very happy with me.

I know many of your friends are aware of this, but physical forms of me give you benefits almost no other asset can offer. This is especially critical when I look at the finances of your world today.

I am also more practical than gold.

And let’s not forget that monetary history equates me with money.

You automatically get all these advantages with me, many of which could be critical in the next crisis. And as you pointed out, you currently get them half off than you could a decade ago.

#2: I Am Dirt Cheap, With Life-Changing Upside

I am the most undervalued asset you can buy today.

Here’s proof. First, in relation to the stock market, I am actually cheaper to buy now, relative to the S&P 500, than I was during the depths of the Great Recession. 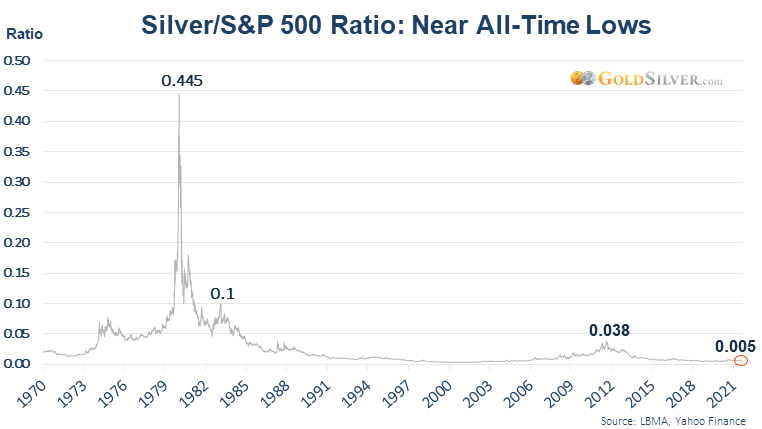 To simply match my price relative to the stock market in 2011, the ratio would have to trade nearly eight times higher than it does today. It would have to rise a whopping 89 times to match the 1980 peak.

I am also the only asset that has never returned to its 1980 high. This makes me perhaps the most undervalued investment that can be bought today.

Last, my ratio to the gold price today is twice what it was in 2011, meaning I would have to double gold’s advance just to match that level. And as many fans know, the gold/silver ratio hit 17 in 1980, what would amount to me gaining over four times more than gold.

This is all to say that…

This is all very compelling, especially when my friend Mike Maloney says my price will soar in the next crisis.

My advice to you and your friends is to continue accumulating me while I’m still cheap. Someday, I promise you, I won’t be.

There are three more things I want you to know…

#3: The Next Spike is Inevitable

As you and your friends know, my price tends to spike a lot. And not just a little.

Here’s all my spikes since the 1970s and how much they gained. 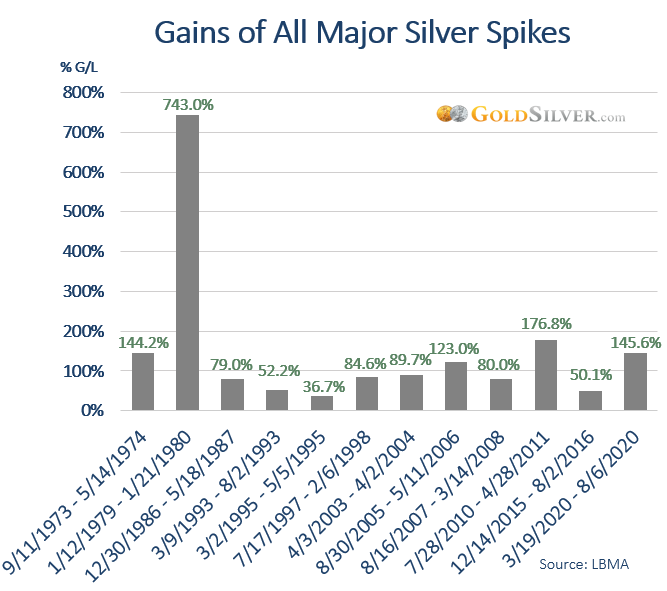 Believe it or not, these spikes all lasted one year or less. This means investors have to own me before the next one kicks in. The burst is so sudden and violent that if you’re not already invested it’ll be too late. And once you own a meaningful amount of me, just wait till the next spike.

Don’t argue against history or put your faith in the current monetary system. The case for owning me will SCREAM to everyone when the next crisis kicks in.

There are some who say my price is artificially suppressed. But there’s something important you should know about this. History unequivocally shows that:

They end for different reasons, depending on the nature of the manipulations at the time, and there are a couple specific reasons they’ll end this time around, too.

First, even though conspirators today use fraudulent paper forms of me to carry out their manipulations, some physical metal is always required to put on these trades. And at some point in the not too distant future, there won’t be enough of me to go around. My uses for industry are exploding and crimping supply—and this will diminish the number, and effect, of the manipulations that can take place.

Second, while the manipulators can exert some control today, the next crisis will overwhelm them. Based on all the bubbles that surround you, my next run will be epic, and they won’t be able to control it—they’ll actually become victims. And consider that there will be millions more investors and trillions more currency units chasing after me than there were in the 1970s.

Not only will everybody want a piece of me, there will be many entities that could overwhelm my market, just like in the past.

In other words, the manipulators will run out of physical silver to play their games, and the effects of the next crisis will overrun them, especially once everyone realizes inflation isn’t “transitory.” Everything changes at that point, and anyone trying to manipulate my price will be destroyed. Remember, I’ve been around a lot longer than them.

In all honesty, it will be quite fun to watch. And highly profitable for you and your friends.

#5: I’m on the Launch Pad and Ready to Ignite

There are numerous catalysts that can and will ignite my price. But I saw the title of your Monday presentation at the Silver Symposium later this month, and I think you’re exactly right: my price will go from boring to boom.

The tiny size of my market will cause my price to explode—as you know it doesn’t take much cash flooding in to send it through the roof. Consider the hundreds of hedge funds, thousands of institutions, billions of investors, and trillions of currency units all wanting a piece of me—the sudden rise in my price from all this demand will take your breath away.

All you have to do is hold on, and make sure you own enough of me beforehand. When investment demand skyrockets again like it has in the past, I will trade at MUCH higher levels. My history shows this.

My advice is to not fret about my current hibernation. Once the next catalyst sets in, regardless of what it is…

In fact, I offered to bet my cousin gold that I’ll outperform him before this cycle is over. He declined, because he knows what my price can do in the right kind of environment… the very kind we’ll see ahead.

The clock is ticking. Don't set yourself up for regret when my price leaves the $20 range in the dust. Make sure you own enough of me to weather the coming storm as well as book massive profits. Sooner or later, it’s coming.