Is the Gold/Silver Ratio Headed to 100? Three Questions to Answer

The gold/silver ratio keeps climbing. And climbing and climbing. When is this darn thing going to reverse and see silver finally outperform gold?

While no one really knows the answer to that question, there are hints that can tell us when things might shift. And just how big that shift might be. Let’s look at some history and some data and see what it tells us…

First, let’s put the current gold/silver ratio in perspective. This chart shows the ratio over the past 100 years. The extreme highs and lows are marked, along with the figure last week. 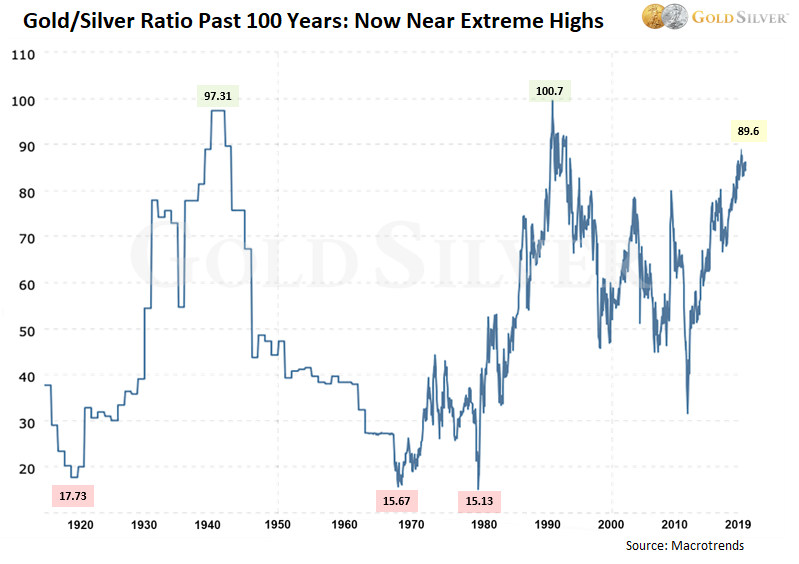 This 30,000-foot view shows just how historically imbalanced the ratio has become.

The two previous all-time highs for the ratio (and remember, the higher the GSR, the cheaper silver’s price is relative to gold’s) were the 1940 high of 97.3 (which occurred near the beginning of the WWII), and the 1990 high of 100.7 (which was reached as the economic boom of that decade kicked off).

You’ll notice the 2011 low didn’t even register as a major low. It hit 31 then, when silver peaked around $49, but it would’ve had to fall by 50% from there to match historic lows. It’s thus been almost 40 years since the gold/silver ratio has traded near those lows.

This highlights the opportunity in front of us:

So the question is: “What’s it going to take to push the silver price up more than the gold price?” To answer that, start with these three big questions…

#1: When Will the Stock Market Reverse or Crash?

So when the stock market falls, the silver price will rise more than gold, right?

Probably not initially. But later, yes. The initial shock of a crash can send many assets down, including silver and gold, particularly if it’s sudden like in October 2008. The threat and eventual start of WWII pushed silver down initially, too. It’s thus possible that gold could fare better initially than silver.

But in both instances, as the crises wore on, silver outgained gold and once again served as not just a safe haven but a highly profitable asset holding. Ultimately it is fear that drives investors into precious metals, and few events scare the mainstream investor more than the dreaded bear market.

#2: When Will We Get Inflation?

One of silver’s strongest historical catalysts is inflation. The silver price rose 3,105% during the runaway inflation of the 1970s, and 448% from 2008-2011 from the fear of inflation, when the US carried out its QE program.

History is clear on this: if you believe inflation is coming at some point, buy silver.

If you’re entertaining the idea that we won’t get inflation, I have a question: how do central bankers respond to a market crash or a declining economy or any other type of deflationary event? It’s one of Mike’s top 10 reasons for owning gold and silver: they come with a central bank guarantee.

#3: When Will the Next Crisis Start?

Once financial, economic, and/or market risks explode, sentiment will shift dramatically for silver (and gold). It’ll be game on, and investors will turn to precious metals like they have many times throughout history.

And given the silver market’s small size, I believe it will rise exponentially more than gold.

Show Me the Money

Because the gold/silver ratio is stretched to historic extremes, I wanted to look at what kind of price silver might hit once the ratio reverses.

The following table shows what the silver price would be, based on the gold price and the gold/silver ratio.

Given just how historically overextended the gold/silver ratio currently is, the snapback rally could easily push it to extremes at the other end. Combine this reversion-to-the-mean behavior with the kind of environment Mike sees ahead and we could be looking at silver prices in the top right columns of the table (or bottom right if we get hyperinflation).

And by the way, don’t forget that your profit will likely come from more than just the rise in the silver price.

Maybe, maybe not. Mike thinks it’s possible. Until one or more of the three catalysts above kick in, the ratio is likely to remain elevated.

Either way, as Pericles said many centuries ago, "The key is not to predict the future, but to prepare for it.”

Prepare for a major reversal in the gold/silver ratio. Extreme levels have never lasted, as history shows, and at some point this one will end, too. Here’s what we’re buying.

Finally, if you missed it last week, be sure to check out my discussion with Mike about this very topic: