Gold vs. Silver [The 5 Differences That Matter Most to Investors]

You’d like to buy some precious metals, but do you buy silver or gold? Is there really much difference between them other than the price? [ View the Current Gold Price ]

Both are “precious” metals, meaning their occurrence in the earth’s crust is rare. But when it comes to investing in gold vs. silver, there are five important distinctions to be aware of. These differences can supercharge your portfolio—or make it a victim.

This article outlines the five differences to know about gold vs. silver, with special emphasis on investment implications…

The total supply of new silver each year is close to 1 billion ounces. Annual gold supply is currently around 120 million ounces.

This makes it seem like the silver market is 8 times bigger than gold. But just the opposite is true, because of the huge difference in their price. Silver’s lower price makes the value of annual supply much smaller than gold’s. 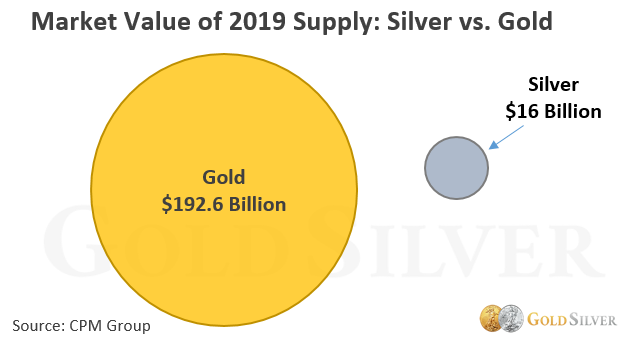 Silver isn’t just smaller than gold. Look how it compares to the market cap of some popular stocks. 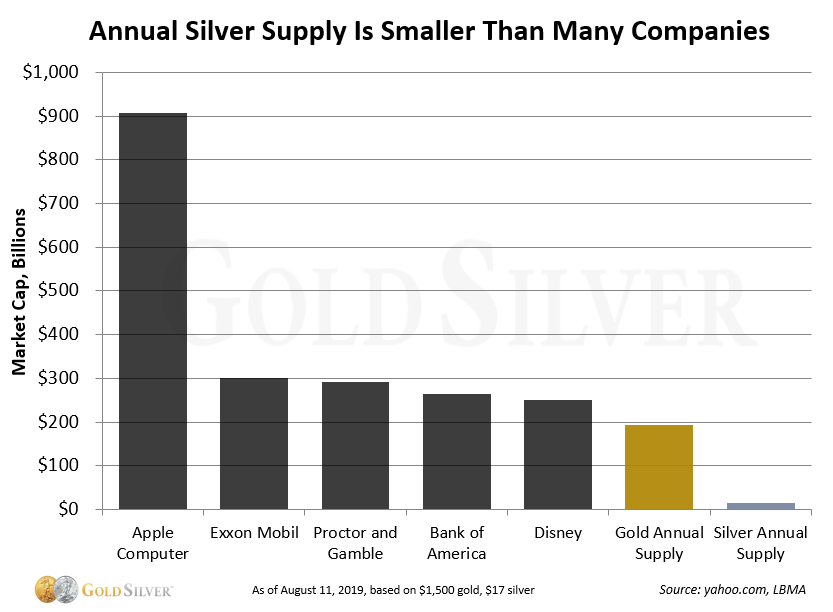 Each of these individual companies has a higher valuation than the entire annual supply of silver! Disney is over 15 times bigger. Apple is over 56 times larger.

This explains why silver is more volatile than gold: It takes only a relatively small amount of money to have a greater impact on its price, more than gold or most any other asset class.

It won’t do any good to buy the metal if you’ll panic and sell at the first big drop.

Here are some examples of how gold and silver performed during some of the biggest bull and bear markets in modern history:

You can easily see that on a percentage basis, silver rises much more than gold in bull markets, and falls much farther than gold in bear markets.

So as an investor, if you buy during a bull market, history says silver will hand you a greater return than gold. Probably by a LOT. And if you believe, like me, precious metals are beginning a new bull market…

The higher volatility also means that you’ll have to be more nimble when it comes time to sell. Silver will selloff faster and farther than gold, so when the bull market looks to be peaking, be sure to sell!

If you’re comfortable with the higher volatility, and buy near the beginning of a bull market, purchasing silver is like adding an extra shot of espresso to your portfolio.

This seems like an obvious statement, but the reason it’s important is because silver has many similarities with gold…

If you buy physical silver—not ETFs, certificates or futures contracts, which are paper investments—you can capture the same benefits that gold offers. Advantages that virtually no other asset provides.

Silver’s advantage over gold is that you can capture all these same benefits but at a much lower cost. Your financial insurance just got more affordable. It’s why silver is called the “poor man’s gold.”

Maybe someday you don’t want to sell a full ounce of gold to meet a small financial need. Enter silver. If you want to buy a car or any other large purchase, you’d use your gold proceeds. But if you just want groceries or a new cell phone, you can sell some silver to cover the cost of those items at the time, without being forced to liquidate your gold.

I think every investor should have some silver around for this very reason.

Investor Implication: Silver will be more practical than gold for everyday small purchases.

Last, silver’s greater affordability makes it more ideal for gifting. Want to give some precious metals as a gift? Silver just made it more affordable to do so.

So, silver is ideal for investors with small budgets, and also for any small financial needs that may come up in the future. Gold is better suited for larger purchases.

All those affordability advantages we just outlined come with a catch: it takes a LOT more space to store silver than gold.

At current prices, the same dollar investment will get you roughly 80 more ounces of silver than gold. On top of that, most silver is a lot less dense than gold—pure silver is 84% larger in volume than pure gold. This means silver takes up as much as 128 times more space than gold for the same dollar value!

Here are some practical examples of that difference. At current prices…

It’s relatively easy to hide some gold coins in a sock drawer or cookie jar, but those same hiding places are impractical for the same investment in silver. Whether you buy coins or bars, you’ll need a lot more space to store silver than gold.

And because it requires more space, the fees for professional storage are higher with most depositories. (However, in the case of [JC1] GoldSilver.com, the storage rate is the same for both metals: 0.06% of asset value per month, $4 minimum, a clear advantage over most storage facilities.)

This difference applies to transporting physical silver as well: it may be more difficult, expensive, and cumbersome.

Last, silver will eventually tarnish; pure gold does not. So silver coins and bars must be stored in a dry place with no exposure to the elements, a concern you don’t have with gold.

It takes a little more strategizing on your part to store silver than gold. But there are definitely ways to do it, as this article shows.

Difference #4: Silver Has Higher Industrial Use

About 12% of gold supply goes to industrial uses. But due to silver’s unique characteristics, a whopping 56% of its supply is used in industry. Silver has so many applications that believe it or not, you don’t go one day without using a product that contains it.

From electronics and medical applications, to batteries and solar panels, silver is everywhere, whether you see it or not.

As Mike Maloney says in his book, “Of all the elements, silver is the indispensable metal. It is the most electronically conducive, thermally conductive, and reflective. Modern life, as we know it, would not exist without silver.”

Why is this important? Because the state of the global economy can have a greater impact on silver demand than gold. Silver is thus more susceptible to economic booms and busts.

But that’s only part of the story… unlike gold, most industrial silver is consumed and then thrown away (and in some cases destroyed during the fabrication process). It’s just not economic to recover every tiny flake or grain of silver from most products. As a result, when the product gets discarded, that silver is gone for good. This limits the amount of silver that can return to the market through recycling.

But won’t the silver price fall in a recession or any serious economic slowdown?

Fair question. Let’s take a quick look at a one of the worst economic periods in modern history and see what happened…

It’s hard to imagine a worse economic environment than the 1970s, especially the second half of that decade: two recessions, a 14% inflation rate, high unemployment, an energy crisis, the Russian invasion of Afghanistan, and ongoing cold war tensions. As for silver itself, industrial demand fell, and global supply rose. Does this sound like an environment where the silver price would rise? 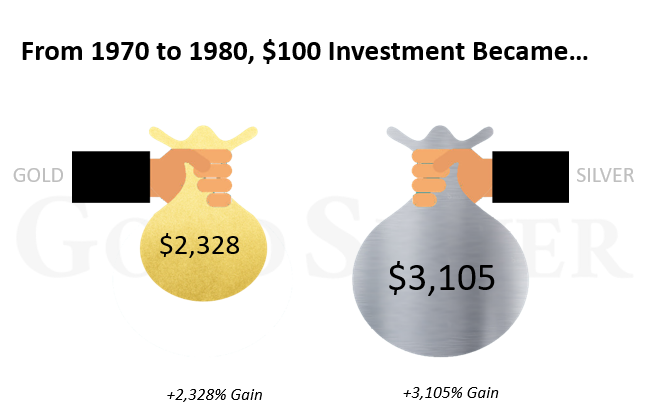 The reason the silver price rose so much was actually because of those issues. Investors bought silver to help shield their portfolios from all the turmoil at the time. And on top of it they earned a stunning return on their investment.

The one economic situation where silver may not do well, at least initially, is a deflationary depression. Something like the Great Depression. However, keep in mind that in dire circumstances such as that, governments and central bankers are likely to institute highly inflationary policies to keep the economy afloat—the very policies that would serve as a launching pad for silver due to its safe haven status.

This difference may not seem to have immediate importance to an investor, but it’s a behind-the-scenes development that could potentially have big consequences in certain circumstances.

Governments and other institutions used to hold large inventories of silver. Today, however, most of them no longer have stockpiles of the metal. In fact, the only countries that warehouse silver are the US, India, and Mexico.

Look what’s happened to those inventories since 1970. 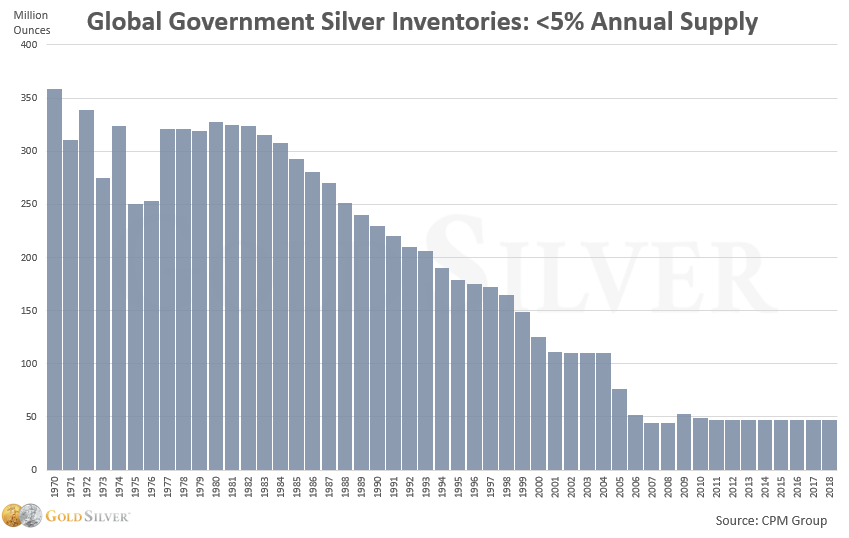 The primary reason governments don’t hold a lot of silver is because it’s no longer used in coinage. But as we outlined above, silver is used in industry to a much greater degree now… so if future industrial needs rise, or the supply chain were interrupted, governments will be ill-equipped to support those needs.

In contrast, central banks hold over 34,000 tonnes (1.09 billion ounces) of gold in official Reserves. And on a net basis, they continue buying every year. These ongoing purchases contribute to the overall demand for the metal.

This source of demand isn’t present for silver. However, it does put the silver market in a precarious position. If the need for physical silver were to suddenly increase—a monetary crisis, a shortage in industrial supply, a spike in investment demand—governments won’t be able to meet these needs with such tiny stockpiles.

This scenario may or may not play out, but it’s a delicate position that could have a deep and immediate impact on the silver market.

5 Major Distinctions Between Gold and Silver