The Potential Looming Catalyst for Silver No One Sees Coming

Editor’s Note: We hope you enjoy the research and education we’ve been providing during these unprecedented times. As you know Mike Maloney strongly believes that education is the key to preparing for the future, as well as profiting from it. This compelling new research from Jeff Clark, while only a possibility, outlines a catalyst so immense that it could alter the silver market for a generation or more. We think it’s worth considering...

There are a number of catalysts that could ignite the silver market over the coming months and years. To Mike and I it seems inevitable that silver will be a direct beneficiary of the monetary madness that defines the world of central banking today. Give us some headline-making inflation, for example, and a roaring bonfire in the silver market will be underway.

But there’s another potential catalyst that is so immense, so market-altering, that it would overwhelm the silver market and profoundly change its structure for a generation or more. Not just something that would send the price soaring, but reshape the supply/demand balance and even change the way people view it.

Big words, I know, especially when most economists don’t view what I’m about to outline a likely possibility. But those are the same people who said in 2005 that real estate wasn’t in a bubble… that in early 2008 the risk of an economic downturn was low… or that as recently as December 2019 the economy was recession proof. And the fact that no one is thinking about this is, in itself, another catalyst, since it would catch the investment world off guard.

Here’s what this looming catalyst for silver could be, along with why I think it’s a distinct possibility and how it could alter the market for years to come…

Yes, it’s true that central banks don’t hold silver in their reserves today. And yes, silver is not part of the monetary system anywhere in the world. And yes, they currently don’t buy silver and keep very little in inventory.

The possibility I’m raising is that they begin to do some, or all, of those things.

Why would they add silver to their reserves? Or begin to stockpile it again?

There are actually many reasons. Here’s five of them…

Governments using silver as a monetary asset is NOT NEW. In fact, silver has been actual currency throughout history more often than gold.

Not only that, according to some sources, central authorities—whether defined as central banks or other entities—have held silver for more than 250 generations.

And as good historians know, the US previously used silver as part of its monetary system, as this infographic shows.

Governments have also stockpiled silver in the past. In some pretty big amounts, too, as I’ll show.

There’s other potential ties to governments and silver…

In today’s world would it really be that surprising to see some countries want to stockpile silver again, whether to sure-up industrial supply or perhaps even some sort of national security purpose? It wouldn’t exactly be a stretch to see China or Russia do that.

There are numerous examples from history of how silver was part of the monetary system… or used in circulating currency… or held in reserves by central authorities… or held in inventory. The idea that governments would buy it is literally an old idea.

#2: A Monetary Crisis Demands It

It is not current central bank policy anywhere in the world—at least that we know of—to hold silver as an official reserve asset.

But a monetary crisis could change that mandate. Perhaps easily, the strongest reason being the result of the fallout from current monetary and/or fiscal policies.

As you know, central banks are creating currency at an obscene pace. And despite not yet seeing any real-world effects of that massive dilution (other than the stock market going higher), I don’t believe in a free lunch. Actions have consequences—if that’s true, then it stands to reason that these extreme monetary interventions will lead to some very significant monetary consequences.

And the greater those consequences, the greater the pressure to find other strategies and ideas to deal with the fallout. A “new” way to solve the crisis.

Silver is a ready alternative to any monetary breakdown.

Silver, like gold, has no counterparty risk. It is no one’s liability.

Silver is money, so governments don’t have to go looking for something else. Its strong monetary history already offers them a viable, ready-to-go option.

There just aren’t many other assets that could serve as a monetary backstop anyway. Stocks? Real Estate? Some other country’s currency? The IMF’s made-up SDRs that don’t exist except as digits on a computer screen?

None of these are sound forms of money. They have their uses—but not as money. There would be no reason for governments to look elsewhere.

Relative to gold, as every silver bug knows, silver is dirt cheap. It requires more storage space, but that’s not a strong enough reason to avoid it.

Given silver’s low relative price they could buy it as a strategic metal—in other words, buy in certain amounts for one specific purpose.

Its low price has made the market so small (see the 4:15 mark) that even just one country starting to buy would send investors worldwide scrambling to get their hands on some of it.

#5: Nothing is Impossible Today

One person I floated this idea to dismissed it as “unrealistic.” But after the pandemic and the protests can you really say that some unexpected event would “never happen?”

The environment is ripe for new approaches, too. Citizens and investors aren’t exactly in love with the establishment these days, the election of populist leaders on several continents being one obvious example.

Last, it wouldn’t be surprising to see politicians try to take monetary power away from central bank authorities. That’s actually one tenet of MMT.

As blatant as the intervention has been in economies, interest rates, stocks, bonds, metals, and other assets, is it really that far-fetched to think that in a major monetary crisis governments might not take the unconventional step of turning to silver, as they have in the past?

Governments today hold a total of 48.6 million ounces of silver in inventory.

This tiny amount is largely the result of silver being removed from the monetary system by virtually every government in the world. The need to stockpile it thus decreased, so they sold their silver. And sold and sold, to the point where the amount stockpiled today is negligible.

Here is the annual amount of global government silver inventories since 1970. 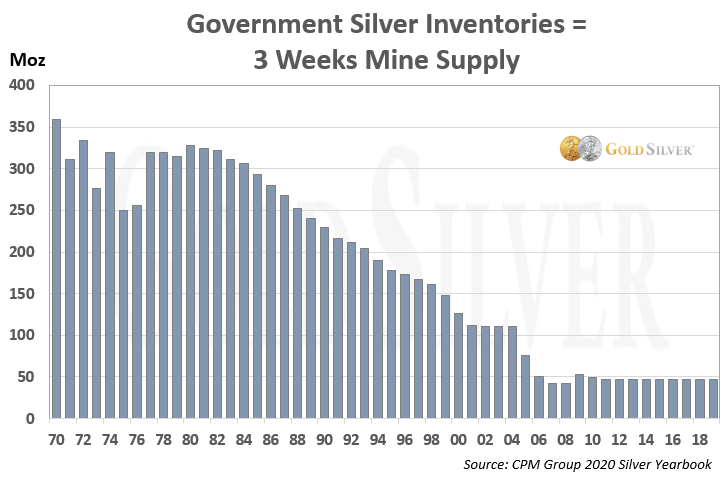 From 1980 to 2007, governments were relentless sellers. Those 48.6 million ounces today equates to just 6.4% of last year’s global mine output, a little more than what miners produce in three weeks. It is a mere 5% of 2019’s total supply. It’s an inconsequential amount, and is far short to serve any effective monetary purpose.

With such little in their coffers, governments would need to buy a lot to make a material difference, whether for reserves or inventories or some other purpose.

The first compelling thing about this idea is that if governments decided for any of the above reasons to buy silver, they would represent a new source of demand. One that is currently not present. This would occur on top of a supply chain that is already strained and amidst a trajectory for new mine supply that is headed nowhere but down.

The second compelling factor is how much they might buy. Let’s take a look at that from several angles… 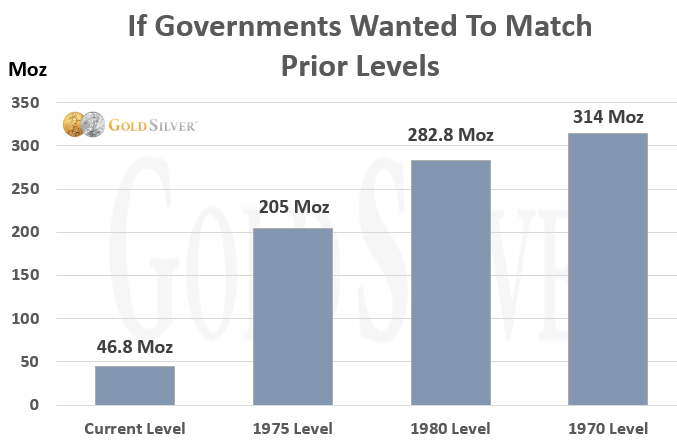 Sure, they could buy over several years, but there’s another issue…

Those amounts don’t realistically represent what they’d need today. For starters, the world has a lot more people in it. A lot more wealth, too, which, combined with silver’s low price has pushed its percent of global wealth to a much smaller level than it was then. Saying what they held 40 and 50 years ago would be sufficient to meet today’s needs would be akin to asking you to live off your 1980 salary.

So let’s be a little more realistic… 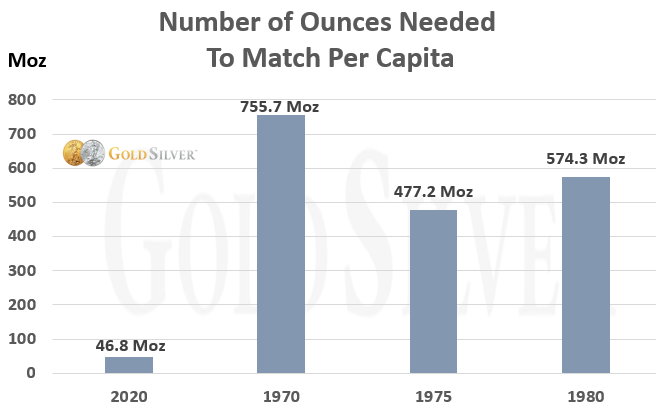 To equal the same percentage of silver for the population as in 1970, governments would need to buy over 755 million ounces. This amount is not available, of course, as it exceeds a full year’s mine supply. Even the amounts for 1975 and 1980 are excessive and unattainable within a short timeframe.

In 1980 silver represented 0.268% of global wealth. But at the end of 2019 it was a miniscule 0.011%. In other words, governments would have to buy 2,436% more silver than what they held then to represent the same percentage of global wealth today. That would look like this. 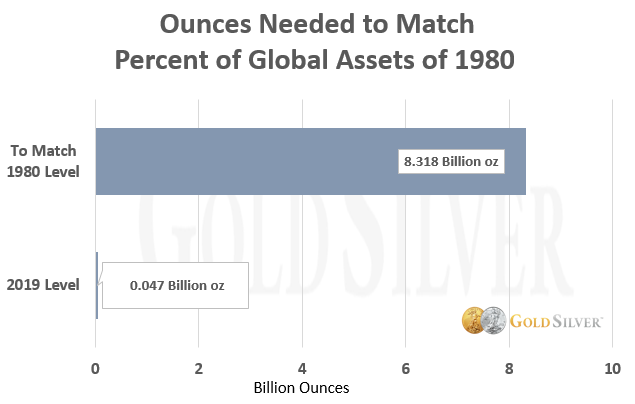 Governments would need to buy 8.318 billion ounces of silver.

That is seven times more than all the silver held by ETFs… more than 26 times Comex “delivery” inventories at the end of 2019, and over 7,000% more than what’s held in London.

It’s also more than the number of gold ounces held by global central banks today. Total gold reserves are 34,891.5 tonnes (1.12 billion ounces), roughly an eighth of the amount of silver they’d need if this were a goal.

Again, this is just for silver to equal 0.268% of global wealth. This is a level they’ve held before, so it’s not some hope I’ve dreamed up.

This all obviously begs one big fat question: given how tiny the silver market is, and given that 15-20% is lost each year, and given that mine supply is in a structural decline… where would they get all this silver?

They won’t. It’s not available. But that may not keep them from trying if monetary issues get as bad as Mike thinks they will.

To be clear, most analysts and economists think the odds of this are low. Maybe they are.

But the greater the crisis the more likely new strategies will be pursued. If this ends up being one of those strategies, it would have a direct, immediate, and immeasurable effect on this teeny, tiny market.

And by the way, I’m not the only one that considers this a possibility. The crew at Incrementum devoted an entire section to it in their new In Gold We Trust report (starting at page 249).

And here’s an important point: if governments do begin to buy silver again, it won’t just push the price higher, but would elevate silver’s importance around the world for many years. It’s hard to imagine that the persona around silver wouldn’t change.

Incrementum’s report summed it up best: “We do not know what the future holds but we would be surprised if, in retrospect, silver will not have proven to be a wise investment for the next generation.”

I’m with them, and Mike Maloney. Regardless of whether governments buy silver or not, there are glory days ahead for this shiny metal.