Most price forecasts aren’t worth more than an umbrella in a hurricane. There are so many factors, so many ever-changing variables, that even the experts usually miss the mark.

But there is value in considering predictions. It can solidify why one has invested, point to factors that may have been overlooked, or compel one to revise their expectations.

So while we take predictions with a grain of salt, let’s look at what might be ahead for gold in 2023, as well as the next five years (you can look up the gold price here).

I’ll start with a survey of analysts, then examine the individual factors that are likely to have the biggest impact on gold, and then conclude with the prices I see based on those factors, including some long-term projections.

This will be fun, so let’s jump in!

These are predictions I gathered from analysts both inside and outside of the gold industry. 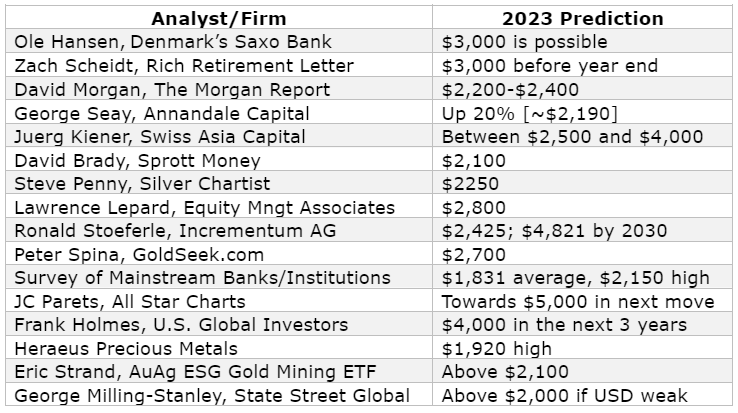 There were some interesting comments that accompanied these forecasts.

There were some bearish predictions too, of course, the most common reason cited was the belief that interest rates will continue to rise and inflation will fall, each of which they believe will soften demand.

Gold Price Predictions for Next 5 Years

Let’s examine the factors that are most likely to impact gold in 2023 and the next few years and see if we can come up with a reasonable expectation. We’ll start with the big three—inflation, recession, and interest rates…

Inflation. One big question is how far inflation might fall. The CPI peaked at 9.1% last June, the highest rate in almost 40 years, and ended the year at 7.1%.

This chart shows the CPI reading for the last 18 months. As a reminder, the Fed and government economists said inflation would be “transitory” in April 2021—which was obviously wrong.

Further complicating the inflation question is the Fed’s insistence that it will lower the CPI to 2%. But… 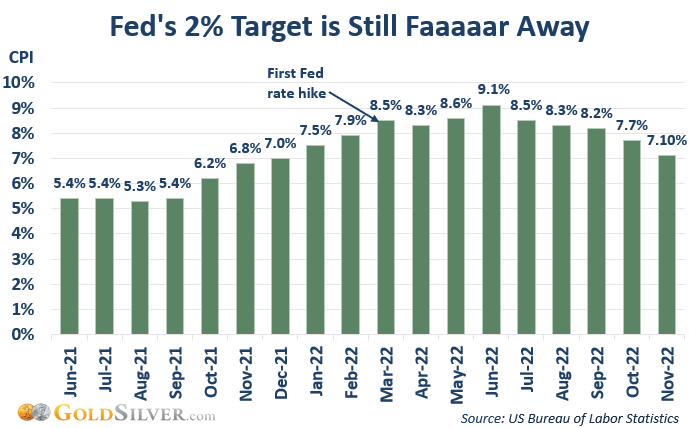 This begs us to ask… can we trust their forecasts? How effective will the Fed’s aggressive rate hikes be? And what if inflation remains above their 2% target for—gulp—years?

Recession. The odds of a recession are high; the most reliable indicator of an upcoming recession is a negative yield curve (10-Year Treasury minus 2-year), and it went negative in Q3 last year.

How does gold perform during recessions? 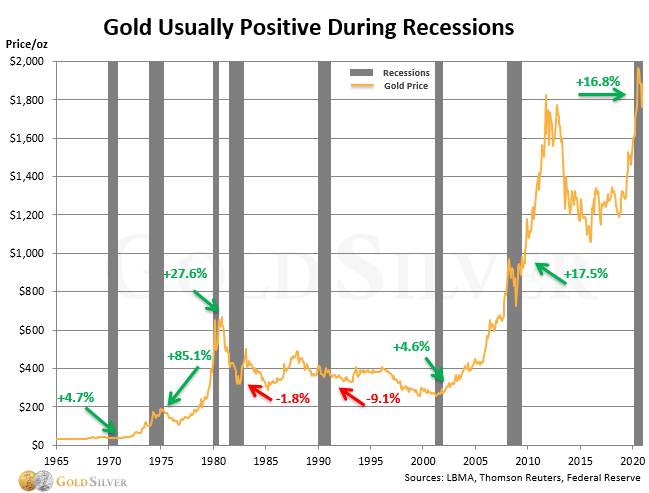 Gold has historically risen during recessions. In some cases the gains were substantial, and the only two declines were single digits.

Interest Rates. How much more can the Fed realistically raise rates?

It’s a fair question, because between the aggressive rate hikes and surging debt levels, payments on federal debt are now at record highs. 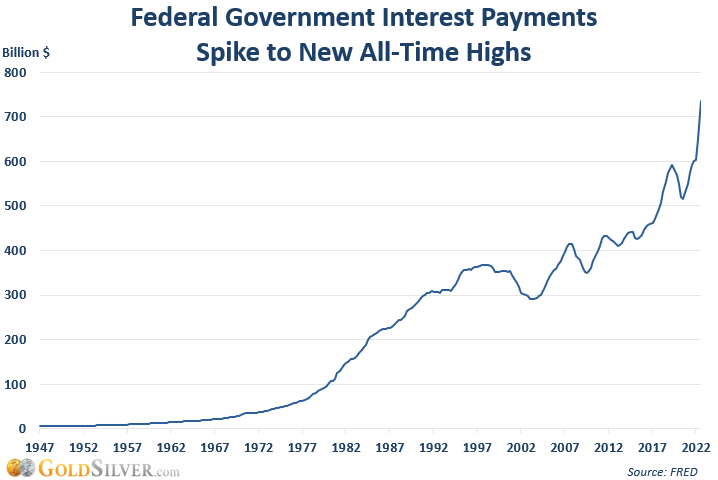 This is the steepest rise in history. It’s a path that is clearly unsustainable.

Further, will the Fed continue to hike rates if the public and investors begin to grumble if we enter a recession and stock markets continue to fall?

And here’s something you may find surprising… since the 1950s, the average time from the last rate hike to the first rate cut is just five months! 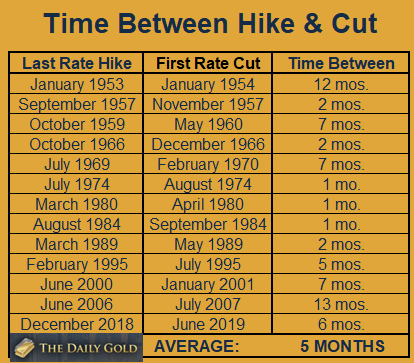 This suggests that if the Fed ends rate hikes in 2023, it is entirely plausible it could begin cutting them before the year is over. This would be very bullish for gold.

U.S. Dollar. One of the factors that kept gold from rising in 2022 was the soaring U.S. dollar, since gold and the dollar are typically inversely correlated.

Does the dollar cool off in 2023? It wouldn’t be surprising to see a pullback, given the extent of the gain last year. If so, one of gold’s biggest barriers will be removed.

Vulnerable Stock Markets. The S&P 500 fell 19.4% in 2022, while the Nasdaq crashed 33.1%. After that shellacking, one could easily be convinced that stocks will bounce. But if inflation persists, rate hikes continue, and a recession materializes, equities will face several strong headwinds. 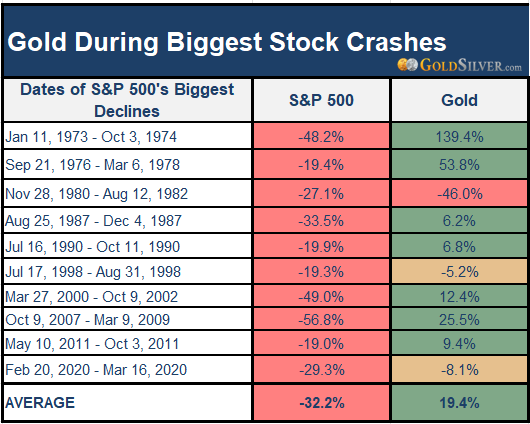 Gold is historically inversely correlated to stocks, an ideal hedge to weak markets.

If we see further stock market weakness or a crash in 2023, gold is likely to rise.

Resumption of QE? The Financial Times says the cycle of global liquidity is bottoming out. “Quantitative easing programmes by central banks to support markets are impossible to reverse quickly because the financial sector has become so dependent on easy liquidity.”

It’s a fair point, since…

A resumption of QE is exactly what money manager Marc Faber said he expects in 2023.

Central Banks. Central bank buying lends support to the price. This may explain why gold didn’t fall in 2022. As a group, central banks bought more gold through Q3 last year than any year since 1967, ironically when the U.S. was on a gold exchange standard. According to the World Gold Council, demand was “primarily driven by a flight towards safer assets.”

China, for the first time in three years, bought more gold for its official Reserves. It purchased 32 tonnes in November, its total now at 1,980 tonnes.

Cleary, the world’s central banks see something that compels them to make an overweight allocation to gold at this time.

Gold’s Technical Picture. A number of chartists have pointed out that gold has a strong technical setup. Here’s what Silver Chartist says in their chart below: “Last month gold staged a clean breakout above the 2022 red downtrend line, suggesting a major trend reversal is underway. Of course, nothing moves in a straight line, but higher highs and higher lows are expected and gold’s prospects for 2023 look bright.”

While the precise timing of an up-move is hard to pinpoint, it suggests a surge is coming in 2023.

Add It All Up. This combination of factors shows there are multiple catalysts that could propel gold higher in both the short-term (one-year) and long-term (two to five years), even if one or more doesn’t play out.

And that’s a big advantage of gold ownership: it isn’t about one factor or another, it’s about any factor that increases uncertainty on the part of investors. And there are a lot of risks surrounding us at this point that could drive investors into gold.

As Mike Maloney points out, the only way he’ll be wrong about gold (and silver) is if they stop printing, which isn’t likely to happen anytime soon. Austerity is completely off the radar in the world we live in right now. This is a built-in catalyst for higher gold prices.

Because of this, my most confident prediction is that over the next few years, possibly longer, the gold price will be trading at much higher prices than where it is now, regardless of what it may do this year.

My forecast for the gold price in 2023 is based on the likely trajectory of inflation, recession, interest rates, stock markets, U.S. dollar, central bank demand, QE, and technical indicators.

As a result, I expect the gold price to be higher in 2023. Here are my predictions.

The most important message from this analysis is that even if I’m wrong, it has rarely been more important to own gold. That means dips in price should be bought, especially if they don’t hold a meaningful amount relative to your net worth.

Either way, remember that…

There are many factors that could impact the gold price, of course, in both the short and long term. To learn more about investing in gold and silver and what might be ahead, especially for fiat currencies, download Mike Maloney's best-selling book for free, Guide to Investing in Gold & Silver.