Wall Street has become a culture dominated by traders. Their zeitgeist on any particular company/asset can set the direction of a trade for months or years.

And, there’s only one thing a Wall St. trader hates more than getting laughed at for being the first guy into a losing trade: Being the last guy into a winning trade. Major FOMO. Fear of Missing Out.

And right now, gold is a winning trade.

This poses a distinct problem for much of Wall St. Mentions of gold in most market conditions are met with either malaise or snark. In those circles, gold buyers are widely seen as perma-bears who always think the world is going to end tomorrow, as opposed to rational long-term thinkers who hedge their obviously outsized currency risk.

But when gold starts running and the reasons driving that run are A) substantial and B) likely to be long-lived, the trader laughter gets quieter. It gets nervous. After all, in addition to all of the longer-term existential threats to the dollar (even the notoriously rosy forecast from the Congressional Budget Office now projects the federal debt running to an unprecedented 144% of GDP)...

Despite perpetual hope heading into them, meetings with China have yielded almost no progress over time, and the tariff standoff has steadily intensified, potentially impacting the U.S. economy

Fresh sanctions on Iran have escalated this conflict to its highest level yet, with Iran vowing the new sanctions mean the end of the possibility of a diplomatic solution

The Fed has capitulated to market and administration rate-cut pressure, and has out-and-out admitted that 0% interest rates and more QE are inevitable.

All of which could signal an end to the bull markets in the dollar and US stocks, and are thus bullish for gold.

After attempting to break through the mid-$1,300s six times over the past five years, gold has smashed through that resistance, quickly rising above $1,400. 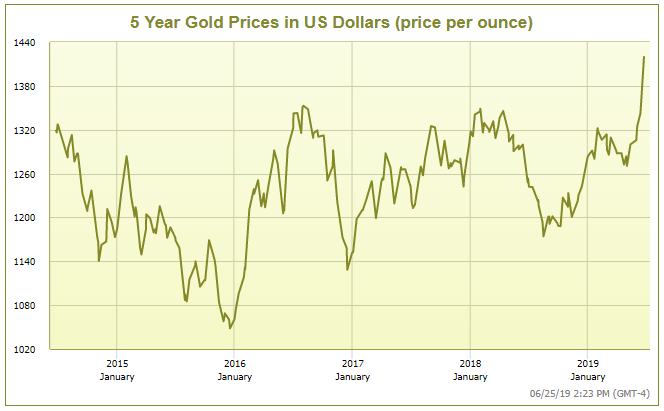 So now Wall St. traders start with the sideways glances... Who’s going to be the first one to go long gold?

Actually, we know the influx has already begun because fund flows don’t lie; Wall St. poured over $1.5B into the leading gold ETF in a single day on June 21, increasing its total assets under management by 4.3%. While we strongly advise against ETF shares for so many reasons, keeping an eye on when institutional money is surging into the gold market is of interest to us, and the trend is obvious.

Make no mistake, this is important. When banks that control massive amounts of investment capital and usually don’t give gold a second thought suddenly become aggressive buyers, this is a huge injection of fresh buy-side demand. And it happens very quickly.

On Wall St., herd mentality seems to dominate. Just look at the 2000 and 2008 bull market runs and rapid reversals. Maybe it is because almost all traders would rather be late than wrong on a trade.

As the momentum behind the gold price grows, stubborn buyers capitulate, fearing being the last one into the rally (or the last rat off of the ship, as the rush is coming out of some other asset class of course). Which drives the price higher. Which leads another hesitant buyer to capitulate, and so on and so forth.

The gold trade is on right now. At GoldSilver.com, while we enjoy a nice upside price run as much as the next guy, we have our eyes on gold’s longer-term potential. After all, while this run is a big change from the last 5+ years, gold’s still well away from it’s previous US dollar high.